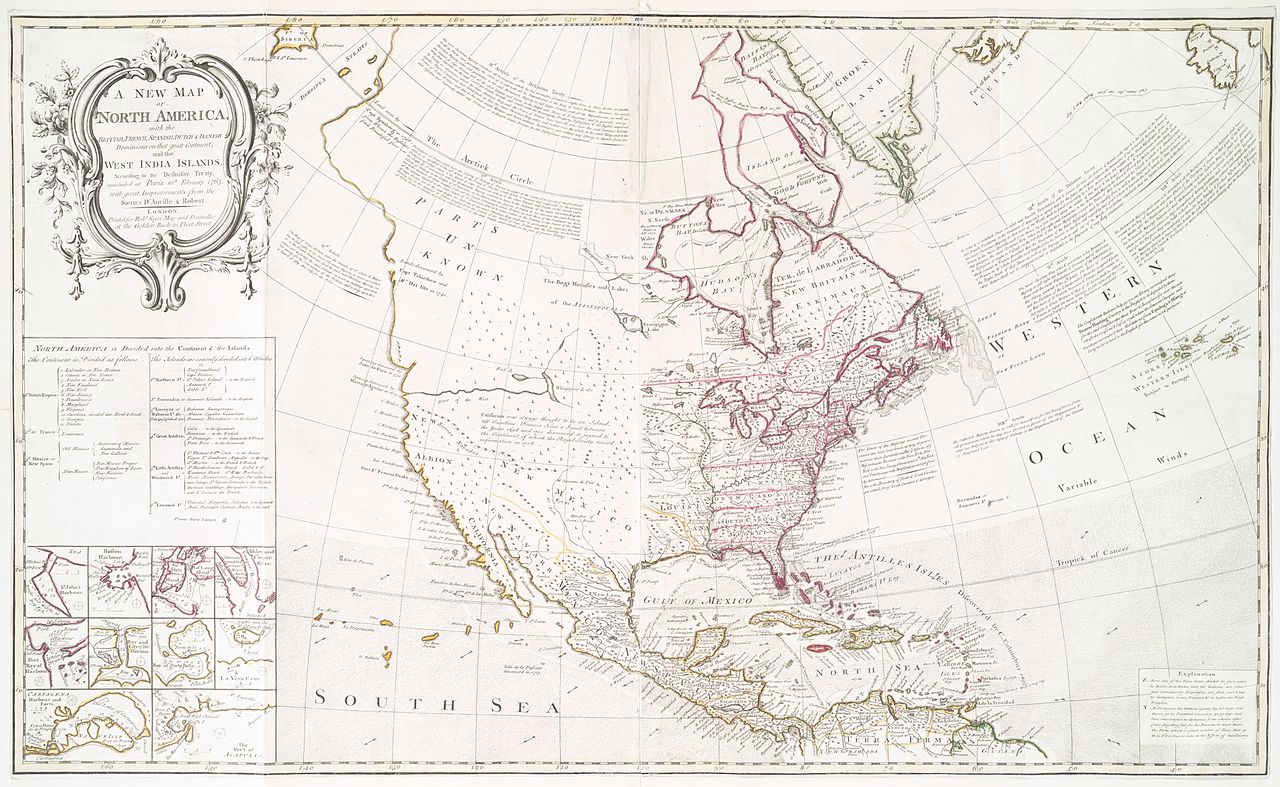 It is encouraging to see that Atlantic history, alongside environmental history, has emerged as a leading line of enquiry. The Atlantic perspective has already done wonders for our collective understanding of the slave trade and the Age of Revolution. Here I hope to recommend a continental perspective as a profitable avenue for assessing Early Canadian and Early American history.

Several years ago, professors of various departments at my alma mater, Bishop’s University, established the Crossing Borders Research Cluster, meant to question socially- and academically-constructed boundaries through interdisciplinary research. In spite of efforts deployed at Bishop’s and other institutions, the national paradigm remains very much a given, with little attention devoted to the historically contested nature of nationality and its cultural and physical borders.

This is particularly problematic in studies of the period preceding the construction of modern nation-states. As conventional studies and textbooks tell us, conflict in the Thirteen Colonies laid the basis for the United States; the Royal Proclamation and the Quebec Act began setting the foundation of Canada as we know it today. However valuable hindsight may be to the historical profession, here it does us harm.

My own research pertains to Roman Catholic institutions as they relate to national identities and governance in North America. Religious discourse, even when represented in denominational terms, tends to undermine other constructed categories. In order to complement late eighteenth-century Atlantic studies, in recent work on the Quebec Act and anti-Catholic rhetoric, I have sought to represent such rhetoric as constitutional, continental, and contingent.

To British subjects in the colonies, the Quebec Act betrayed the constitutional settlement of 1689-1690 and implicated Lord North and Parliament as agents of a popish plot. Colonists appealed to their Hanoverian king, the Protestant heir to the Glorious Revolution, but in vain. By the time these colonists were ready to indict George III for betraying his coronation oath, in 1776, other concerns had pressed ahead of anti-Catholicism.

That the issue was continental in scope may be gleaned from Congregationalists’ apocalyptic language, which was turned not against the twenty thousand Catholics concentrated in the Middle Colonies, but against those in Quebec, who were four times that number. Thus, as a corrective in the traditional American narrative, there must be greater effort to “decentre” Maryland and answer George Rawlyk’s injunction to look to a broader geographical context. (Rawlyk drew particular attention to Nova Scotia.) At last, the tides of anti-Catholicism drew in and out as political and military expediency required, as in the invasion of Quebec in 1775-1776 and in the French alliance of 1778.[1]

This is also part of an effort to redress the short shrift that religion has gotten in Atlantic history.[2] The transatlantic networks formed in the eighteenth and early nineteenth centuries have been made to reflect purely secular interests or the standard credo of the Enlightenment. This approach ignores developments of magnitude in Europe – e.g. the Gordon Riots of 1780 – and in North America. We might cite encounters between American insurgents and Catholic Canadians in Quebec beginning in October, 1775.

The diaries and memoirs of Patriot soldiers, though mostly by New Englanders, are remarkably devoid of the strident anti-Catholicism emanating from Boston. The habitants, it seems, were Catholic in spite of themselves, slaves to an oppressive institution that would not long stifle their yearning for liberty. Catholicism was a problem as an institution, when it became entwined with civil government, but the faithful were benign when separated from the levers of power. In these respects and others, Quebec, like Rawlyk’s Nova Scotia, must be integrated into a larger story. Or, from a Canadianist perspective, “external” events should come closer to the centre of our standard story of national development.[3]

Alan Taylor reminds us that the fate of the continent was very much contested and unsettled into the nineteenth century – our present national paradigm has little explanatory value for that period. It seemed that ultimately either the British or the American system would prevail throughout. If nothing else, the Peace of Ghent proved to be a victory for coexistence.[4] This, however, would not be thoroughly evident until Lower Canada’s Patriots made their own attempt at revolution. Through the subsequent cross-border raids, British and American authorities signified their commitment to peace by increasing law enforcement on both sides of the border, transforming that boundary into a durable geopolitical reality.

On a microhistorical level, we might point to the persistence of borderland exchanges in the Eastern Townships of Quebec, as Jack Little informs us. In Little’s view, cultural exchange did not directly follow the establishment of an international border, which indeed remained poorly defined and poorly enforced for decades. And that cultural frontier remained in flux as French Canadians migrated into the old Puritan citadel in pursuit of industrial wages. We may be reminded of Senator Lodge’s remark, over a century ago, that French Canadians “have been, in the broad sense, Americans for generations, and their coming to the U.S. is merely a movement of Americans across an imaginary line, from one part of America to another.”[5]

The sprinkling of “Little Canadas” across New England redefined what it means to be Canadian and what it means to be American, Catholicism again having a hand in both. Immigration from Quebec altered New England’s social landscape in a way unmatched by Americans’ attempt to refashion Quebec in 1775-1776. And if the late nineteenth century seems as remote as the late eighteenth, we may see a similar process at work recently with extensive migration and cultural exchange in disregard of the national boundary between the United States and Mexico.

My work on Catholic institutions indicates that conventional depictions of the North American “immigrant church,” a product of Irish, German, Italian, and Eastern European immigration, miss a great part of the picture geographically, socially, and temporally. Catholicism has been a continental problem that has troubled boundaries and civil institutions for centuries – and I suspect that we might find new, similarly interesting stories to tell if we look beyond the borders that we have created and tend now to see as immutable.

Patrick Lacroix is a Ph.D. candidate and a former Fulbright grantee at the University of New Hampshire, where he has taught since 2012. He is the author of “Immigration, Minority Rights, and Catholic Policy-Making in Post-War Canada,” which recently appeared in Histoire sociale/Social History. Forthcoming publications include a transnational study of the Rebellions of 1837 and a piece on French-Canadian immigration to New England.

[2] Notable explorations of the topic do include Carla Gardina Pestana, Protestant Empire: Religion and the Making of the British Atlantic World (Philadelphia: University of Pennsylvania Press, 2009) and Richard W. Vaudry, Anglicans and the Atlantic World: High Churchmen, Evangelicals, and the Quebec Connection (Montreal and Kingston: McGill-Queen’s University Press, 2003).

[3] I hope to discuss this project in greater detail in a future contribution to Borealia.

Featured Image: A new map of North America: with the British, French, Spanish, Dutch & Danish dominions on that great continent, and the West India Islands, according to the definitive treaty concluded at Paris 10th February 1763 / with great improvements from the Sieurs d’Anville & Robert. New York Public Library via Wikimedia Commons.