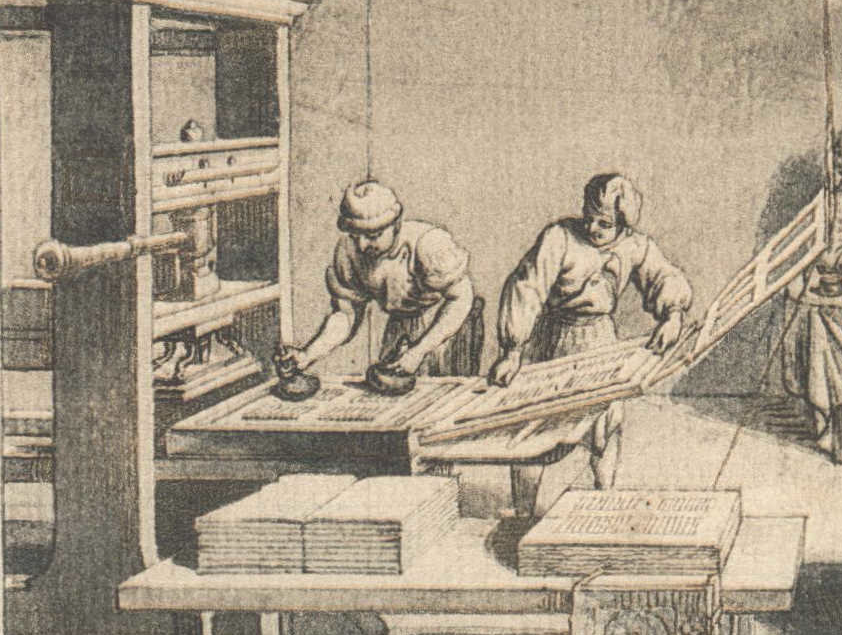 “Were I to name the most striking peculiarity of our neighbours in the United States, I would say that they are set apart from the rest of mankind by a certain littleness.” So wrote the pseudonymous Verax to the Nova-Scotia Magazine in 1789. Yet for the colonial print community of Halifax and Quebec City, being British meant “being part of something larger” (19).

One of the pressing questions for provincial Britons was how to be “British” despite their distance from London, the centre of imperial power. Michael Eamon argues in Imprinting Britain that eighteenth-century residents of Quebec City and Halifax used the press and various forms of sociability to fashion a distinctive British identity. At a time when British Americans in the Thirteen Colonies were wrestling with the same questions with strikingly different results, the colonists of these two cities chose to express their commitment to British liberties alongside propriety, civility, and monarchy. While affirming their place in the British Empire, elites in Halifax and Quebec also participated in the British Enlightenment, that cultural and intellectual movement that emphasized reason, practical scientific knowledge, and the improvement of society—the British Enlightenment tending to be more moderate than some of its more radical, republican expressions. The colonial print community of Quebec and Halifax, then, managed to express their liberty while remaining part of “something larger”—the British Empire and its moderate Enlightenment.

Imprinting Britain is a meticulous study of every extant English-language newspaper printed in eighteenth-century Quebec City and Halifax (among other printed and manuscript sources). But it is not only a study of texts or readers in isolation: this is a book about print as sociability, as well as print and sociability. That is, Eamon explores how print facilitated a communal identity, and how print interacted with other sites of sociability—clubs, lodges, coffeehouses, and theatre—to define Britishness in these colonial capitals.[1] 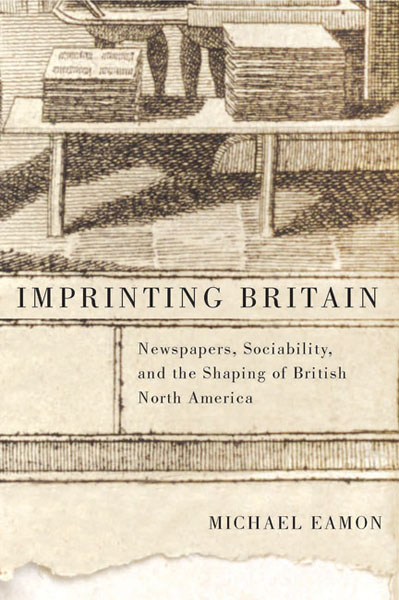 The colonial print community of British North America turned to print to regulate the behaviour of ideal colonial subjects and to share useful public knowledge. Printers and readers used the press to communicate government policy and proclamations. But readers themselves also took to its columns, often pseudonymously, to address local intemperance, gossip, or other breaches of aspiring gentility. Personal liberty was voluntarily circumscribed by social propriety, as one 1765 correspondent to the Halifax Gazette argued: “It is the duty of every individual, of what class or denomination soever, to conduct himself on every occasion, wherein either public or private communities are concerned, so as to make himself a useful member of society; to consider the good of the whole rather than a Part; and to prefer the public good before any private interest” (76). Eamon argues that this qualified liberty was characteristic of the British North American identity, contrasting the republican experiment to the south.

Eamon’s cultural definition of Britishness also includes the moderate Enlightenment’s emphasis on “useful” and “improving” knowledge. He gives us enticing glimpses of Haligonians who participated, however modestly, in the transatlantic Republic of Letters, as well as the surprising liberality of Governor Frederick Haldimand’s Quebec Library.[2] Newspapers, almanacs, and magazines disseminated Enlightenment science in abridged form to a broad reading public.

Colonial newspapers were closely allied with other kinds of face-to-face sociability. The pages of colonial newspapers aired debates about the propriety of Freemasonry, theatres, and coffeehouses, with printers often advocating for their usefulness. As the detailed appendices demonstrate, those papers prove to be one of the few windows into colonial associative life, and readers are indebted to Eamon for cataloguing mentions of societies, coffeehouses, and plays performed in Halifax and Quebec City. Northern winters were no obstacle to flourishing social scenes, as one Quebec City correspondent reported in December 1790: “Tho’ surrounded with Ice and Snow, we enjoy health & are at least as social as in any other quarter of the Globe” (116).

Eamon charts a shift in colonial associative life as the eighteenth century progressed, from sociability for the sheer pleasure of it toward an increasing concern for the public good. “Let the social virtues shine / Doing good is sure divine,” declared a Masonic song printed in a Nova Scotia newspaper (135). (The Illuminati conspiracy theorists among our readership will be interested—perhaps apprehensive—to know that every eighteenth century governor and lieutenant governor of Nova Scotia was a Freemason! [133])

Mention “print” and “sociability” in the same sentence, and cultural theorist Jürgen Habermas’ concept of the “bourgeois public sphere” is sure to come to mind.[3] However, though it was incubated in similar coffee houses and likewise deliberated through a burgeoning print culture, the public sphere of British North America, Eamon argues, was less egalitarian than its bourgeois European or republican American counterparts. The colonial print community created “hybrid spaces of sociability and social control” (11), and its discourse “favoured consensus and balance over discord and radical change” (189). Imprinting Britain will find a place on reading lists on British North American sociability and the public sphere, alongside works by Jeffrey McNairn, Darren Ferry, and David Sutherland.[4]

Finally, in narrating the development of a distinctively British North American print culture, Eamon stresses continuity over the last half of the eighteenth century, downplaying the American Revolution as the pivotal moment. The emphasis on the liberty and utility of the press, that is, did not arrive with the Loyalists, but had deeper roots in British custom, Enlightenment conviction, and colonial experience.

[Note: An earlier version of this book review was published in The Journal of the Royal Nova Scotia Historical Society, vol. 18, 2015, and appears here with the Journal’s permission.]

Keith Grant is a PhD Candidate in History at the University of New Brunswick, writing a dissertation on religious communication networks and book culture in the Atlantic world, from the perspective of one Nova Scotia community, ca. 1770-1850. He is a founding co-editor of Borealia. He tweets at @keithsgrant and @earlycanada.

[1] For a large-scale study of European print and sociability, 1700-1900, see the Canadian-based international project, “Interacting with Print.”

[2] See Eamon’s more detailed analysis of this library in “‘An Extensive Collection of Useful and Entertaining Books”: The Quebec Library and the Transatlantic Enlightenment in Canada,” Journal of the Canadian Historical Association / Revue de la Société historique du Canada, 23.1 (2012), 1-38.

[3] Jürgen Habermas, The Structural Transformation of the Public Sphere: An Inquiry into a Category of Bourgeois Society, trans. Thomas Burger (Cambridge: MIT Press, 1989 [1962]).