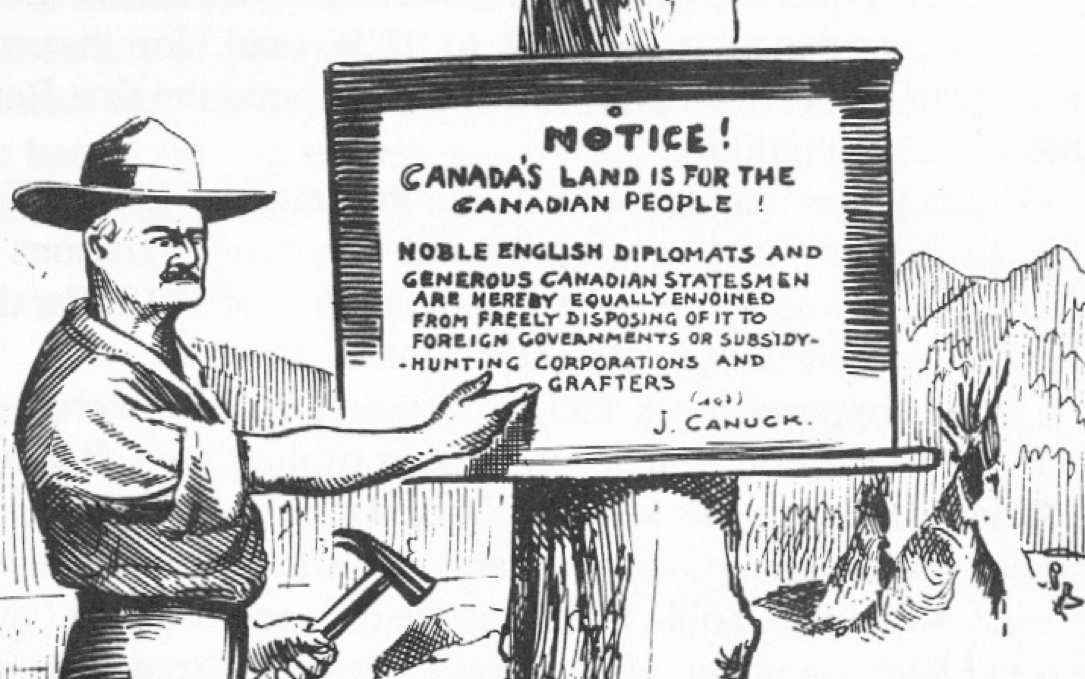 Editors’ note: This essay is jointly posted with our partners at ActiveHistory.ca, and appeared in an earlier version as a Letter to the Editor in the National Post (Oct. 26, 2017).

Fundraisers love anniversaries. They’re like birthdays, right? Presents can’t be far behind. But when it’s the anniversary of a death, it’s not so much fun. For me, as an historian (and an old person), most dates on my calendar are full of births and deaths. Every celebration evokes at least a tinge of grief among the memories.

So, this summer, when I read in a National Post op-ed (July 10, “Dalhousie Student Union’s ban on Canada Day celebrations was shameful”) that “Canada Day celebrates Canadians’ freedom from oppression,” I had one of those moments of mixed memories.

July 1st – and #Canada150, for that matter – reminds me of so much more than just contemporary Canada’s goodness.

Confederation, whose anniversary we mark on July 1, wasn’t about freeing anyone from oppression.

Cartoonist Sam Hunter’s defiant commentary on the land given away by British diplomats (and Canadian politicians). (reprinted in Randall White, Fur Trade to Free Trade (Dundurn, 1988).

Confederation did not “free” Canada from Britain. Even after 1867, laws in the Dominion of Canada could be unilaterally overturned by Britain, through the imperial power of disallowance. And British judges remained our Supreme Court until 1949. We couldn’t even decide on our own whether to go to war or not. Canadians had no independent foreign policy until after 1931.

We were “free” – but only as British subjects, not Canadian citizens.

Occasionally, after Confederation, Canadians complained that the Brits traded away Canadian interests for imperial benefit. What could we do but complain? Theirs was the foreign policy power.

If Confederation wasn’t a glorious blow against our colonial masters, what was the deal actually about?

One classic in the list of “causes of Confederation” is that the Canadas (Ontario and Quebec) were teetering on the edge of bankruptcy. British investment bankers were worried about the safety of their investments in Ontario and Quebec. They advised British legislators and Canadians that a larger political unit, including the four colonies on the Atlantic coast, would restore central Canadian credit.

Without credit, there would be no money to build railways into the northwest territories. 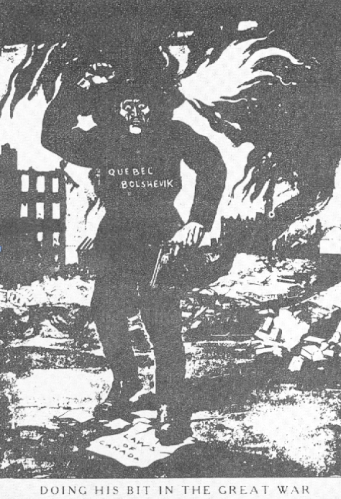 The 1917 federal election was notorious for its Francophobic content. In this cartoon, a horrifying “Quebec Bolshevik” is “Doing his bit in the Great War” by trampling on the “Laws of Canada.”

In the age of railway building, financing issues like that made Confederation a practical business matter. Two of the coastal colonies said no to the deal, and two said yes. Nova Scotia and New Brunswick saw some potential benefit for them in participating in western expansion. Later, Nova Scotia made a strong effort to leave, but negotiated better terms and stayed in.

Some francophone Quebecers feared in 1867 that Confederation would yoke them in a project that would return them no benefits. More than once, their descendants have looked back and have seen a history of subjection. On Canada Day, they no doubt remember Prime Minister Borden calling their province a “foul blot” on Canada during the 1917 election.

All of this is long ago and old and, apparently, not that well known. Real discussions of the event we commemorate on July 1 and the full spectrum of its legacies have played a rather small role in the Canada 150 celebrations this year.

A notable exception is that indigenous people in western Canada have pointed out, correctly, that one of the reasons for Confederation was to organize the takeover of their land (that “western expansion” for which railways were built.)

Today, we have to deal with the cruel legacies of that takeover. Old people and Canadian historians know that anniversaries inevitably bring up mixed memories. So let’s not simply speak of freedom sought and accomplished.

If Canadians are now free from oppression (and some are not), their freedom is the result of many struggles since 1867:  a complex history, 150 years long, and worth learning.

Shirley Tillotson is an adjunct member of the Dalhousie University Department of History and an Inglis Professor at the University of King’s College. Her most recent book, Give and Take: The Citizen-Taxpayer and the Rise of Canadian Democracy (UBC Press, October 2017). Professor Tillotson has been teaching Canadian history to undergraduates since 1989.

Featured Image: Detail from cartoonist Sam Hunter’s defiant commentary on the land given away by British diplomats (and Canadian politicians). (reprinted in Randall White, Fur Trade to Free Trade (Dundurn, 1988).