[Teach My Researchis a new occasional series at Borealiato help connect research and teaching, putting the latest scholarship on early Canadian history–Indigenous, French, British, or early national, to about 1900–into our classrooms. We are inviting authors of recent historical monographs or research articles to think about how their scholarship could translate into high school or university classrooms, providing teachers and students with curricular connections, discussion questions, and primary source materials. If you’d like to talk about contributing to this series, please contact us at editors@earlycanadianhistory.ca.]

The research that we are presenting in this post has two parts. The first is a short article called “Food, Foodways, and Francisation in Seventeenth-Century Québec” that we wrote for the Dublin Gastronomy Symposium.[1] The second part is a package called Quince Jam and Moose Muffles: Food in New France (also available in French as Mufles d’orignac et cotignac: La nourriture en Nouvelle-France) that we created to be a resource for secondary and postsecondary teachers and students. This package contains excerpts from different primary sources, some previously unpublished, that introduce students to evidence for the history of food, colonization, and religion in New France.

We used these same primary sources in our own research for the article, so the two parts (“Food, Foodways, and Francisation in Seventeenth-Century Québec” + Quince Jam and Moose Muffles) can be used together if teachers would like to bring their students into a discussion of historical methods, archival research, the editing of texts, and the relationship between primary and secondary sources in learning about history. 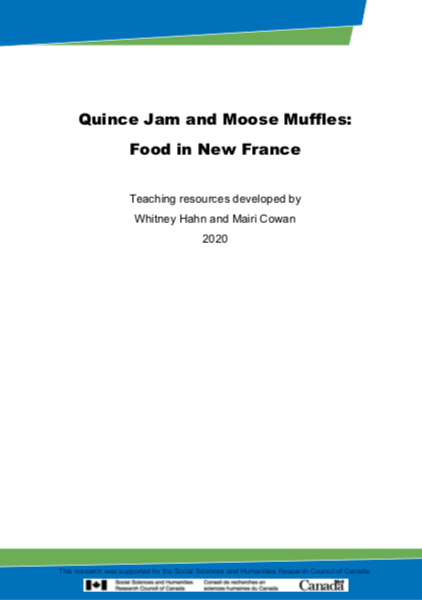 Click on the image to link to the resource package. 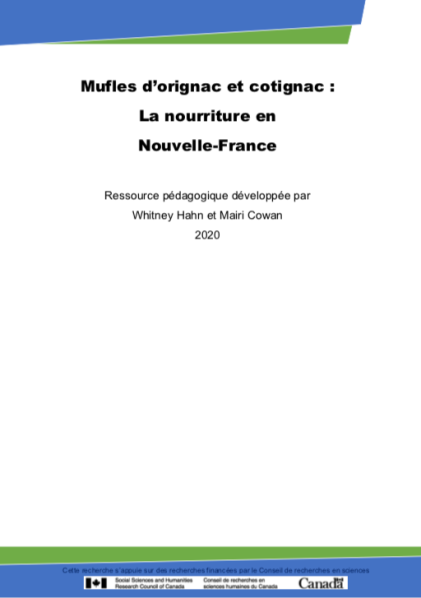 What is your article about?

Our article examines the relationship between food and power at the Ursuline convent in Québec. In it, we argue that the nuns’ attitudes toward food were rooted in European ideals, but that their thoughts and behaviours shifted in response to the realities of daily life in Canada. This argument adds a new dimension to our understanding of how “francisation” functioned in theory and in practice. As a colonial strategy, “francisation” was a policy centered on the conversion of Indigenous peoples to Catholicism and their adoption of French cultural norms.[2] The foodways at the Ursuline convent show that even people at the forefront of the policy’s implementation knew that it could not work as the Crown hoped.

What are some of the primary sources that you used in your study, and how might instructors use them in their classes?

We used a lot of unpublished records from the archives of the Ursuline convent (the Pôle culturel du monastère des Ursulines), as well as more familiar and widely available sources such as the letters of Marie de l’Incarnation and Pierre Boucher’s Histoire véritable et naturelle des moeurs et productions du pays de la Nouvelle-France vulgairement dite le Canada. We were so fascinated by the Ursuline manuscripts and with how these relate to other primary sources that we decided to put together a package that would allow students to encounter these sources for themselves. The result is Quince Jam and Moose Muffles.

It can be difficult to find primary sources about the social history of New France that are easily available to students, especially when the students require translations into English. The Jesuit Relations and the letters of Marie de l’Incarnation are often used, and these certainly do provide a rich repository of interesting information. We hope that Quince Jam and Moose Muffles will provide instructors with additional material for their courses.

Among the sources that we have included are some of the letters by Marie de l’Incarnation, one of the nuns at the Ursuline convent; sections from a book by Pierre Boucher, governor of Trois-Rivières, about the foodways of New France; an account of expenditures at the Ursuline convent to show what foods the nuns were purchasing; and lists of donations to the convent to show what foods the nuns were receiving as gifts. An introduction at the start of the package offers suggestions for how to use all the materials together for one or more lessons. To help students understand how to interpret the primary sources, we have written brief introductory essays that provide historical context, biographical sketches on the primary sources’ authors, and marginal notes that explain unfamiliar terms. Where possible, we have provided the sources themselves in several formats with different levels of editorial intervention so that teachers can choose whichever is best suited for their classes: photographs of the original archival documents, exact transcriptions, transcriptions rendered into modern French, and translations into English.

What are some curricular connections between your research and common class topics or courses in early North American history?

The article and the primary sources could be used in general survey courses on Canadian History, Quebec History, Colonial North American History, and Early Modern History to give students a sense of daily life in New France.

They are most obviously connected to courses in food history and the history of religion, but they could also be used to consider questions of colonialism, assimilation, conversion, and resistance.

For students interested in the history of language, these sources provide some fascinating examples of early modern French.

What Historical Thinking Concepts can this work help students learn?

We think that this work can help students practise all of the Historical Thinking Concepts:

Analyze cause and consequence

How does it help students achieve the Core Competencies and Learning Outcomes of the AHA History Tuning Project?

The article “Food, Foodways, and Francisation in Seventeenth-Century Québec” will help students build historical knowledge by teaching them about an aspect of daily life in seventeenth-century New France and about how something as basic as what people ate was connected to larger questions of migration, religion, and colonialism in the early modern world. The primary sources in the Quince Jam and Moose Muffles package will allow students to develop historical methods as they interpret primary source accounts that do not always agree with each other or with dominant narratives of their textbooks. In combining the article with the primary sources, students will recognize the provisional nature of knowledge, the disciplinary preference for complexity, and the comfort with ambiguity that history requires. Students will encounter different perspectives of different authors, and they will come to see that not all of their questions can be addressed with only one unambiguously correct answer. As they read through the sources and see silences that call out for explanation and partially hidden motivations of historical actors, they will learn to apply the range of skills it takes to decode the historical record because of its incomplete, complex, and contradictory nature. If asked to provide their own interpretation of the sources, the students will be able to use these materials to create historical arguments and narratives, and, if encouraged to think about the legacy of colonial institutions today, they will use historical perspective as central to active citizenship.

Mairi Cowan is an Associate Professor, Teaching Stream, at the University of Toronto Mississauga. She is a historian of the late medieval and early modern world, with specializations in the social and religious histories of Scotland and New France. She also researches how best to teach and learn history at the secondary and postsecondary levels. You can find her on Twitter  at @Historian_Mairi.

Whitney Hahn lives and works in Annecy, France, as a freelance researcher. She is particularly interested in the history of food. She works closely with museums and other cultural institutions, most recently on the evolution of food and foodways in Savoie in the 18th and 19th centuries.