The American Revolution wasn’t simply American. The Early National period was hardly national at all. From 1774 to at least 1815, regional linkages and continental strategies shaped the development of American states and British provinces as people, policies, and ideas traversed a porous and fluid border. Ironically, loyal British colonies were less foreign to Americans in the late eighteenth century than Canada is to Americans today. Colonial and early American newspapers carried news from Halifax and Montreal; Revolutionary politicians, military figures, and leading intellectuals paid close attention to developments in the northern colonies; and American geographies published in the 1790s had entries on (and maps of) most of the British colonies.

Historians, it seems, have gotten in the way. The emergence of national narratives on both sides of the border has bifurcated what was a shared history. Lately, however, American historians have begun looking north in ways that reflect the attitudes, curiosities, and ideas of their ancestors. Leading scholars at major American institutions have recently tackled the Acadians (expelled from their “American homeland”), loyalists and late loyalists, Joseph Brant and the Six Nations, and the War of 1812.[1] Borealia, its American sibling The Junto, and those who contribute to these important resources have made crystal clear that the new generation of American historians considers Canada a worthy subject of inquiry. 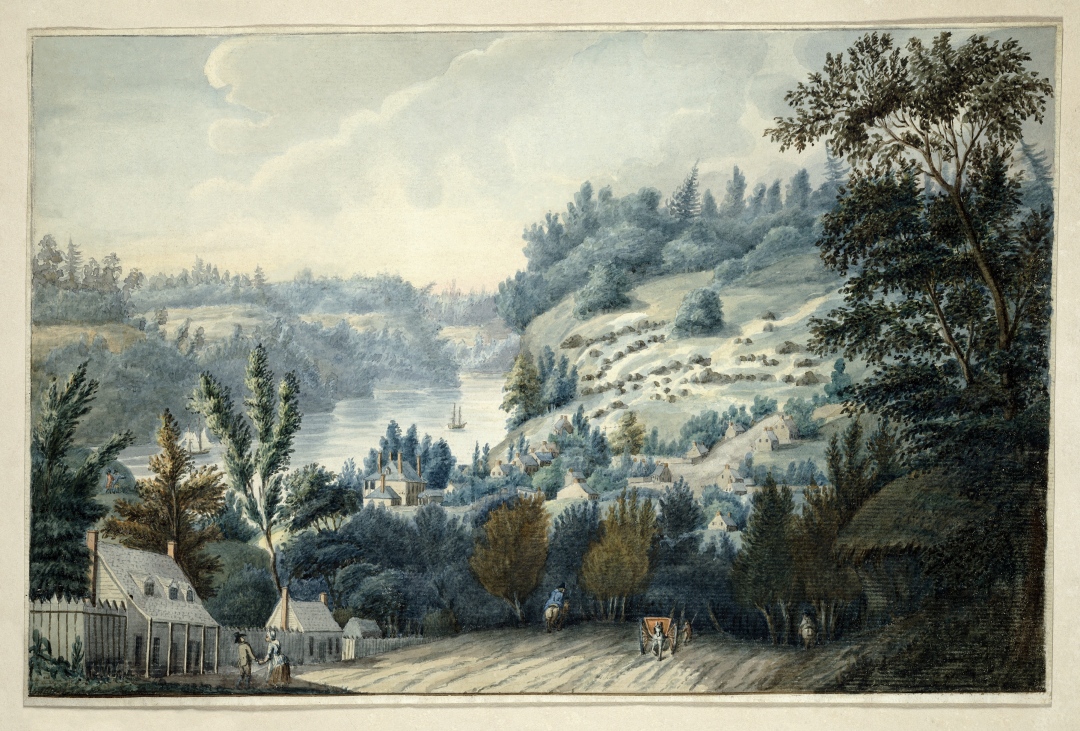 It’s important to think regionally and continentally in ways that question and complicate the flimsy political and national divisions that existed as de jure but hardly de facto influences during the late-eighteenth and early-nineteenth centuries. The Revolutionary period is an excellent place to start, as it brought Americans and British subjects into regular contact with each other. There were military battles, of course, but the fight was also over ideas. Excellent work is being done on the Quebec campaign and loyalists (especially on this blog), but other instances are equally provocative. For example, in 1779, British forces from Halifax invaded Penobscot harbour, constructed a fort at what is now Castine, Maine, and declared the establishment of a new loyal colony, New Ireland. The idea was Atlantic in its inspiration. Loyal residents of Massachusetts wanted to create a new province for those who wished to remain within the empire, so they proposed the project to imperial officials who eventually agreed.[2] By the early 1780s, however, pamphlets were circulating in Philadelphia announcing the founding of the new American state of New Ireland, previously known as Nova Scotia. This was the work of Alexander McNutt, a former resident of Nova Scotia and colonial promoter of dubious character. He drafted an insane constitution and sent copies to Benjamin Franklin in Paris hoping to secure representation for his colony at the peace talks.[3] The battle for New Ireland in eastern Maine was as much about a contested regional past (during which British, French, and Indigenous nations competed in the northeast) as it was an independent national future. Looking north from the American colonies reveals that borderlands were not just territorial, but also ideological.

Canada shaped the American identity in times of peace as well as war. Benjamin Franklin arrived in Paris six months after congress issued the Declaration of Independence. It didn’t take long for Franklin to appear as an American, an identity that had crept up on him over the years. He brought with him to France a symbol of his new identity. It was a soft marten fur cap, bushy and brown in the style of a backwoods trapper. It fit snugly on his large head, and he pulled it down to his eyebrows. He wore it often, indoors and out, even when he posed for a portrait. He got the hat on a trip to Canada, and it might well have reminded him of the province’s importance. “The Doctor at last touched upon Canada, as he generally does upon the like occasions,” Richard Oswald, the British peace commissioner, recorded in his journal.[4] Franklin continued to press for the British surrender of Canada at the peace negotiations until he fell ill and could pursue the matter no more.

Even after the peace of 1783, many Americans assumed that Canada would join the Union. The Articles of Confederation, which governed the United Colonies until they were replaced by the Constitution, provided Canada with a unique status. Article XI stated that Canada could join as an American state at any time. In the debates surrounding the drafting and ratification of the Constitution (1787-8), the British provinces remained both a threat and an opportunity. A letter writer from Louisville expressed his frustration at American neglect of its western settlements:

In case we are not countenanced and succoured by the United States (if we need it) our allegiance will be thrown off, and some other power applied to. Great-Britain stands ready, with open arms…When once re-united to them, ‘farewell—along farewell to all your boasted greatness’–The province of Canada and the inhabitants of these waters, of themselves, in time, will be able to conquer you.—You are as ignorant of this country as Great-Britain was of America.[5]

This statement was a stark recognition of the persistent regional divisions that kept Americans looking towards British colonies.

There are other, equally telling examples of British North America’s influence on the creation of the United States. In the early 1780s, Ethan Allan flirted with the idea of making Vermont a new British colony, which caused no small amount of concern among the delegates in Philadelphia.[6] Twenty years later, Alexander Mackenzie’s Voyages West from Montreal, which recounted the North West Company trader’s voyage to the Pacific, inspired Thomas Jefferson to secure the American west. The President’s copy of Mackenzie’s account travelled with Lewis and Clark across the continent. They also carried a map, on which Jefferson had noted discoveries made by David Thompson, a trader and explorer for the North West and Hudson’s Bay Companies, who mapped the 49th parallel.[7] Westward expansion in North America was an entangled and competitive endeavour less about nation building than about commerce, trade, and competition. Central to this subject (and to the era generally) are the Native nations whose homelands were invaded and defended in ways that belie nationalist histories. Sacagawea, an American icon, could easily be compared to the relatively unknown Charlotte Small, David Thompson’s Métis Cree wife.[8] Small travelled with Thompson from the Rockies to Quebec, covering much more ground than Sacagawea (or Lewis and Clark, for that matter). Exploring Lewis and Clark without understanding Mackenzie, Thompson, and the Indigenous histories of North America serves to elide the shared regional and continental histories of British and American territories.

The chorus of early Canadianists telling stories about the British provinces is strengthened by the addition of American historians looking north and exploring early Canada’s impact on the United States. Separate nationalist historiographies have created a continental version of the “two solitudes” that did not exist among early Canadians and Americans.[9] By continuing to challenge national narratives and thinking about British provinces and American states as early subjects and citizens did, historians can create a past that better reflects the shared experiences that shaped lives, politics, and ideas in early North America.

Jeffers Lennox is an Assistant Professor of History at Wesleyan University. His current book project is North of America: The Revolution, British Provinces, and Creating the United States, 1774-1815, and is under contract with Yale University Press. His first book, Homelands and Empires: Indigenous Spaces, Imperial Fictions, and Competition for Territory in Northeastern North America, 1690-1763 is forthcoming from University of Toronto Press. You can find him on Twitter at @jefferslennox.

[3] The three pamphlets attributed to McNutt include: To the inhabitants of the state of New Ireland, and all others on both sides of the Atlantic, who are interested in the great and important contest between the rising empire of North America and the island of Great Britain (Philadelphia: 1780); The constitution and frame of government of the free and independent state and commonwealth of New Ireland: as prepared by the special direction of the people, for the consideration of their convention, when met. Composed by those who are invested with proper authority for that purpose (Philadelphia: 1780); Considerations on the Sovereignty, Independence, Trade and Fisheries of New-Ireland, Formerly known by the Name of Nova-Scotia and the Adjacent Islands: Submitted to the European Powers, That may be engaged in settling the Terms of PEACE, among the NATIONS AT WAR (Philadelphia[?]: 1781[?]).

[6] The Allan-Halidmand correspondence can be found in Records of the Governor and Council of the State of Vermont, vol. 2, pp. 396-485.

Featured image: Jedidiah Morse, A new map of North America from the latest and best authorities, in The American geography; or, A view of the present situation of the United States of America: containing astronomical geography; geographical definitions, discovery, and general description (1794). Public domain via Wikimedia Commons.