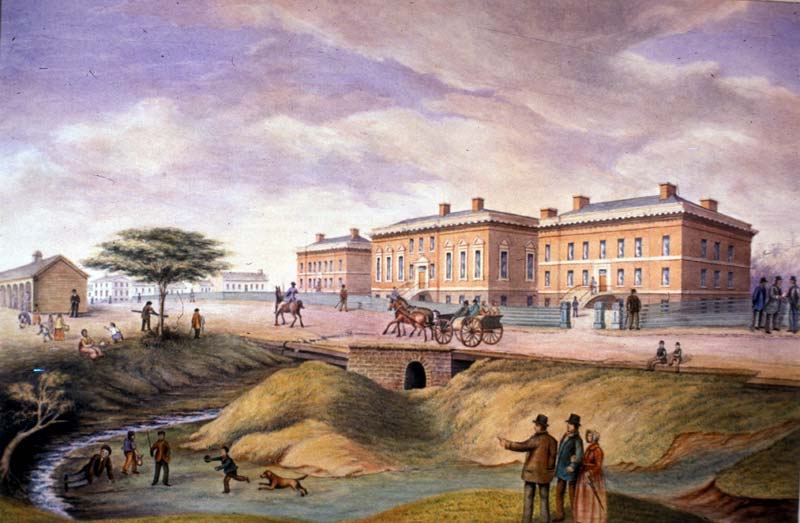 Disappointing economic growth, especially in comparison to the United States; controversy surrounding immigration from a strife-plagued land; and a communications strategy designed to benefit conservative forces while discrediting their progressive rivals. Sound familiar?[1]

Needless to say, all of these issues have featured in the (seemingly interminable) federal campaign of 2015. Yet they were also at play during the Upper Canadian election of 1836. This struggle pitted tories – including members of the notorious Family Compact – against reformers – including moderates like Robert Baldwin and radicals like William Lyon Mackenzie – in one of the more heated political contests in pre-Confederation history. Aggravating tensions between these groups were issues (notably economics, migration, and partisan “messaging”) that occupy prominent positions in contemporary Canadian political culture, and may well play a role in determining the outcome of this October’s election.

By virtually all accounts, the economy is Canadians’ main concern for the 2015 campaign. On this issue, Stephen Harper’s opponents have cited the country’s poor economic performance – a problem that seems all the more glaring since the United States, which fared worse than Canada during the Great Recession, is experiencing comparatively robust growth – as one of his government’s principal failings. (Harper’s supporters, for their part, might argue that the country’s economic foundations – the debt-to-GDP ratio, for instance – are strong, and that whatever problems do exist are largely the unavoidable result of tumult elsewhere in the world.) Similarly, during the lead-up to the 1836 election, Upper Canadians voiced concerns about what they saw as the anaemic state of the colony’s economy, which was especially upsetting given the relative prosperity enjoyed by their American neighbours.

Among the main economic grievances expressed by Upper Canada’s reformers – many of whom were yeomen farmers based in hinterland settlements surrounding Toronto – was the fact that the colony’s agricultural exports were subjected to tariffs by the United States, while American farm products entered Canada duty-free and benefited from preferential access to the British market. A reform-controlled assembly elected in 1834 attempted to level the playing field by imposing a tariff on American agricultural imports, only to have their initiative thwarted by a Legislative Council dominated by Compact fixtures who typically lived in cities. (Although, in fairness, the Council’s actions met with the approval of inhabitants of embryonic agrarian communities who relied on cheap American imports to sustain themselves.) This development exacerbated reformers’ resentment toward the Compact, which exerted tremendous economic influence as a result of its extensive involvement with the Bank of Upper Canada and the Welland Canal, among other important institutions.

Compounding matters for many reformers was the fact the United States – which was in the midst of the speculative bubble that burst with the Panic of 1837 – was experiencing an economic boom that prompted an ever-expanding number of Upper Canadians to relocate to western states. From the reformers’ perspective, prosperity south of the border laid bare Upper Canada’s intolerably sluggish economic development, which they routinely attributed to the Compact’s misguided schemes.[2]

Immigration – and, specifically, debates over whether Canada is doing enough to alleviate the suffering of Syrian refugees – has emerged as a significant issue in the 2015 campaign. Immigration was also an important concern in the era of the 1836 election, although in this case attention centred on the political activities of British immigrants who had left behind hardship in their homeland in hopes of finding greener pastures in Upper Canada.

Upper Canada’s population swelled in the early nineteenth century due to an influx of British immigrants whose transatlantic journey had been triggered by the economic downturn that beset Britain after the Napoleonic Wars. These immigrants – who often arrived impoverished and plagued by diseases like cholera – were welcomed by conservative figures in the colonial government (including such Lieutenant-Governors as John Colborne and Francis Bond Head) who saw them as a potential bulwark against republican doctrines disseminated in Upper Canada by reform-oriented demagogues. In truth, many of these immigrants had little knowledge of, or interest in, colonial politics; instead, they were primarily concerned with subduing the Upper Canadian environment and creating viable farms for themselves and their families. Moreover, insofar as they were engaged with Upper Canada’s public affairs, many British immigrants were likely receptive to the idea of moderate reform, not least because phenomena like responsible government – one of the colonial reformers’ primary objectives – had effectively been instituted in metropolitan Britain since the eighteenth century.[3] Still, colonial conservatives were confident that they could garner immigrants’ support if they portrayed their struggle with the reformers not as a fight against modest constitutional liberalization, but rather as a clash with the blood-drenched principles of revolutionary republicanism.

To a great degree, the tories were right. Convinced that Upper Canadian reformers were exponents of anti-British views, many immigrants coalesced around the colony’s conservative standard-bearers. This tendency was especially evident among members of the Orange Order, a staunchly pro-British, anti-Catholic institution that originated in conflict-wracked Ireland and was introduced by immigrants in the early nineteenth century. Its members proved vigorous tory supporters during the 1836 election largely because Upper Canada’s reformers, who were reviled as treasonous republicans, were seen as a greater threat to the colony than Catholics, whose numbers were small before the mid-1840s. (As well, numerous Upper Canadian Catholics – including such figures as Bishop Alexander Macdonell – happened to be archconservatives, which facilitated cooperation with Protestant tories.) So emphatic was the Order’s support for the conservative cause that its members have been described as the “shock troops” of Upper Canadian conservatism, attesting to their notorious capacity for violence.[4]

Few aspects of Stephen Harper’s Prime Ministerial tenure, if any, have been as controversial (and polarizing) as his party’s use of negative political advertisements. For Harper’s supporters, the ads merely underscore concerns about his opponents – Stéphane Dion’s communication skills, Michael Ignatieff’s commitment to Canada, Justin Trudeau’s judgement – that had already been circulating in ordinary Canadians’ minds. For Harper’s critics, by contrast, the ads preclude substantive debate on matters of public policy by saturating the airwaves with ad hominem assaults and simplistic smears that have a predictably detrimental impact on political discourse. In 1836, conservatives employed a provocative communications strategy that disparaged their rivals as a means of ensuring electoral success.

During the 1836 campaign, tory denunciations of Upper Canada’s reformers emanated from two complementary sources. The first was the Lieutenant-Governor, Bond Head, who eschewed his office’s traditional impartiality by wading into colonial politics and denouncing the tories’ opponents at every turn. In accessible, unadorned language he pilloried the colony’s reformers as de facto republicans, studiously ignoring the fact most of them were only interested in securing liberties that were already enjoyed by their metropolitan counterparts (enamoured of Jacksonian democracy, Mackenzie and his radical followers were outliers). The second were conservative organizations, especially the British Constitutional Society (BCS), that took pains to blanket Upper Canadian communities with writings (the attack ads of their day?) that impugned the reformers’ loyalty and portrayed the tories as indispensable guardians of the “British connection” in colonial North America.[5] Cumulatively, the initiatives of Bond Head and the BCS – which reached large segments of the population – proved highly influential.

For readers who may not know, or who may have forgotten, conservative forces prevailed in the 1836 election. Having suffered defeat in 1834, they stormed back – literally and figuratively – to claim victory two years later, winning a decisive majority in the colonial assembly and defeating such stalwart reformers as Barnabas Bidwell, Peter Perry, and even Mackenzie himself. (Although tensions between tories and reformers would continue to fester, leading to the outbreak of the Upper Canadian rebellion the following year.) While the aforementioned issues – economics, immigration, and partisan messaging – were by no means the only ones at play in the election, they were among the concerns weighed by Upper Canadians as they pondered which side to back. It remains to be seen whether one or more of these issues will determine the outcome of the upcoming federal election. To be sure, it would probably be unwise to think that the outcome of the 2015 campaign can somehow be gleaned from a contest that took place amid markedly different circumstances upwards of a century and a half ago.[6] Unsatisfying though it may be as a concluding observation, it might be safest to say that time, as always, will tell.

An incorrigible political junkie, Denis McKim teaches Canadian and American history at Douglas College, British Columbia, and is a founding co-editor (with Keith Grant) of Borealia.

[1] ‘Déjà Vu All Over Again’ is usually attributed to Yogi Berra (1925-2015), whose other endearing malapropisms include ‘no one goes there anymore, it’s too crowded’; and ‘when you come to a fork in the road, take it.’

[6] For key moments in post-Confederation political history see the recent post at the blog Clio’s Current.