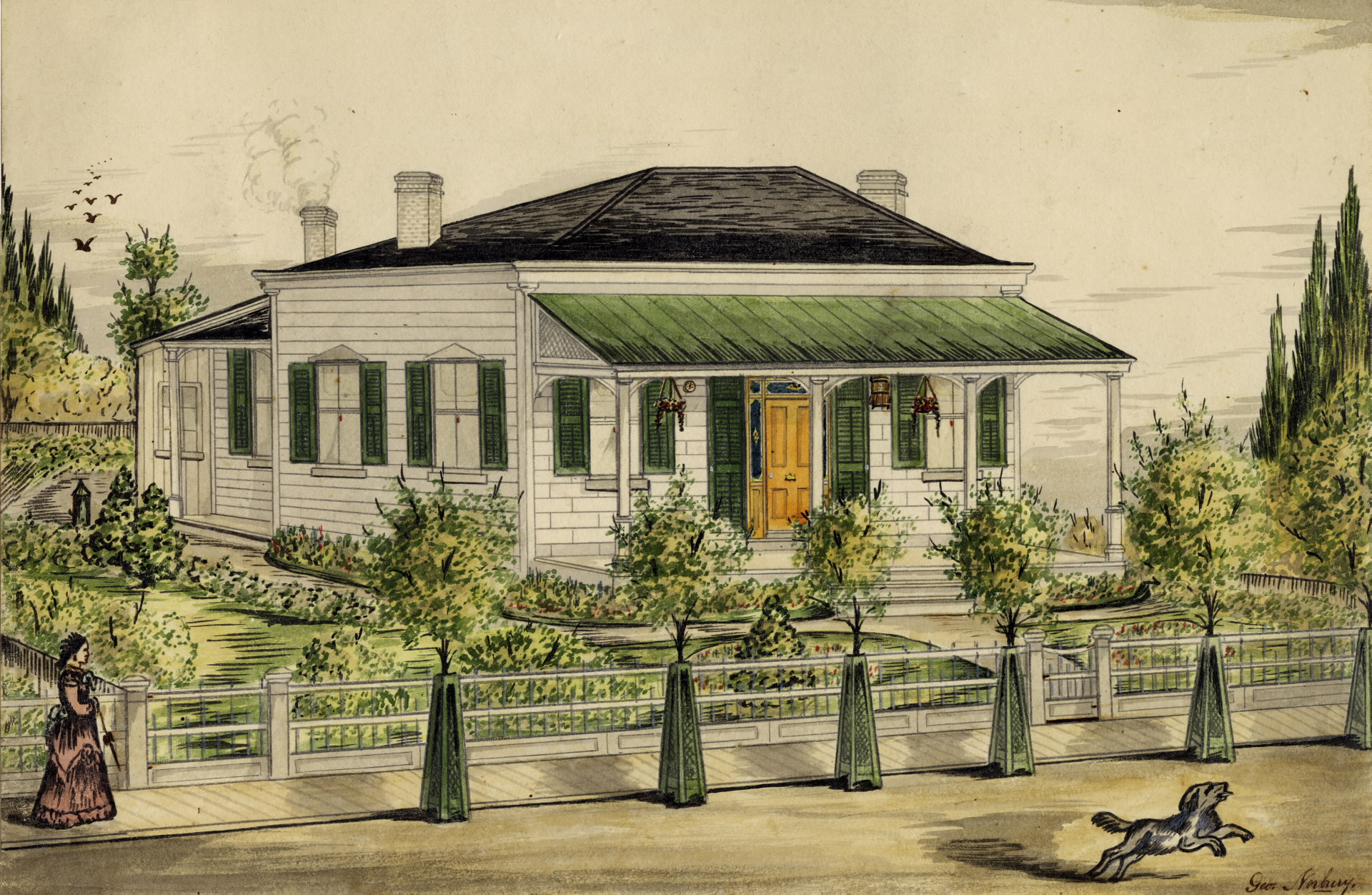 Preserved among the Papers of the Executive Council of Upper Canada, themselves an archive of the settler colonial project in northern North America, is File M: “Correspondence re Markland Investigation.”[1]

Compiled by an unnamed civil servant in the midst of a tumultuous white settler rebellion that forced the imperial government to intervene in colonial affairs, File M archives the 1838 inquiry into the sexual “habits” of Upper Canada’s Inspector General, George Markland. The state correspondence, witness testimonies, and personal letters included in File M bring into relief an historical juxtaposition that is important for both historians and Canada’s queer communities to understand: as colonial reformers mobilized the language of independence, freedom, and liberty to demand the abolition of irresponsible colonial rule, they also applied the powers of the developing colonial state to criminalize forms of non-marital sex, including same-sex sex, that were believed to undermine their own claims to white, male independence and authority. In short, File M forces us to reckon with the straightness of the colonial order of things in the “age of liberal revolution.”[2]

Prior to 1838, George Markland’s empire-work would have been visible to many in Toronto and throughout British North America. His labour helped establish Upper Canada College, King’s College, and encourage British immigration as well as facilitate the transfer of Indigenous lands to the colonial state.[3] This was work designed to reproduce empire in Upper Canada. Markland was also directly involved in the project of colonial rule as a member of the unelected Executive Council. On 12 March 1836 he resigned in protest, a decision that put him at political odds with some members of the colonial elite and appears to have marked the beginning of his slide into disrepute. 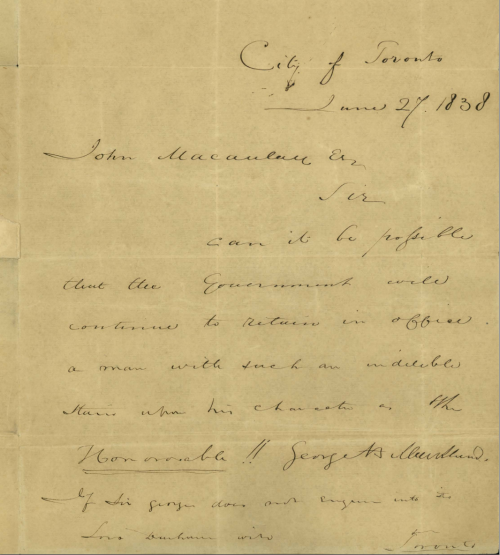 One of the two anonymous letters Toronto penned to colonial officials on the sexual habits and dubious character of George Markland in the summer of 1838.
Credit: LAC, RG1 E3, Vol. 50, File M.

Two years later, on the eve of Queen Victoria’s Upper Canadian coronation celebration, an individual identifiable only by their moniker – Toronto – had had enough of Markland. It was 27 June 1838. That day Toronto composed a letter to the recently gazetted civil and private secretary of the colony, John Macaulay, wherein he questioned Markland’s fitness to hold public office. “Can it be possible,” charged Toronto, “that the Government will continue to retain in office a man with such an indelible stain upon his character as the Honourable!!  George H. Markland?” Only months earlier, hundreds of white British subjects had taken to the street and seigneury to demand liberté and independence through the abolition of irresponsible metropolitan rule in British North America. Many of those men were imprisoned. Eight were banished to Bermuda.[4] That April, Lieutenant Governor George Arthur, who had only recently arrived from Van Diemen’s Land (where the sexual relations among convict men were a pressing concern), hanged two more men for treason. Unwittingly drawing local, colonial, and imperial histories together, Toronto explained, “If Sir George [Arthur] does not enquire into it, Lord Durham will.”[5] That Toronto presumed Lord Durham, the English peer appointed by Queen Victoria to inquire into the causes of rebellion and to make recommendations for the future administration of the British North American colonies,[6] ought to also be occupied by the intimate matter of Markland’s sexual habits hints at the historical intersection of same-sexuality, manly independence, and political liberty.

Toronto let their note dry, and folded it in half, then again, and folded it twice more before stuffing it into an envelope addressed to Macaulay. It was postmarked two days later on June 29, 1838. It appears that Macaulay received Toronto’s anonymous note, as it was included among the twenty-three documents he transmitted to the Executive Council as part of the inquiry. Other correspondence reveals that over a period of two months that summer, while treasonous schemes were being hatched in taverns and on the colony’s borderlands, Markland, Macaulay, and Arthur all grappled with how to proceed. By August, and after various delays, Arthur had issued his instructions, commanding the Executive Council to determine whether the “representations having been made” to the Lieutenant Governor about the Inspector General were “derogatory to his character as a public Officer.”[7] That Arthur issued such instructions to the Executive Council in the midst of a political crisis that was, in part, about the political authority of the Executive Council itself, reminds us that sexual independence and political liberty, and by extension the right of responsible, independent self-government, were more closely aligned than we might realize.[8]

Extract of testimony given by Henry Stewart on 7 August 1838 where he recounts an intimate encounter between his brother and Markland.
Credit: LAC, RG1 E3, Vol. 50, File M.

File M indicates that ten witnesses connected to Markland through ties of work, education, and affection testified at the weeklong inquiry.[9] None produced direct evidence of criminal activity (sodomy had been reaffirmed as criminal in Upper Canada in 1836 when an earlier colonial version of England’s Offence Against the Person Act was revised), and the inquiry ended abruptly on 7 August 1838. That day Henry Stewart told the Executive Council about an 1835 encounter between John, his younger brother, and Markland. At the time John would have been 17, and Markland 45.

On the evening of Sunday he [John Stewart] had met Mr. Markland, who asked him to walk with him. That, they had walked up towards the Garrison. On the dusk of the evening, that, Mr. Markland had leaned upon his shoulder and had put his hand in an indecent manner on my brother’s person. And that he, my brother, immediately kicked Mr. Markland on the body and immediately ran away.[10]

With Henry’s testimony the Executive Council had literally heard enough. Although there is no record of the four Executive Councillors who conducted the inquiry having reached a ‘verdict,’ Markland resigned six weeks later, on 30 September 1838. Macaulay was promoted to inspector general the following day.

With time the archival terrain of File M became obscured by what W. S. Wallace described, in 1927, as an “almost Egyptian darkness.” In an article published in the University of Toronto Monthly, Wallace argued, “The solution [to] the mystery is to be found in certain documents which I recently stumbled across in the Public Archives at Ottawa.” Wallace did not articulate what it was that had led to Markland’s absence from the annals of history, suggesting only that the “character of the charges against Markland may perhaps be deduced from these facts.”[11] Wallace, like Toronto and those who testified at the 1838 inquiry, did not name Markland’s transgression. In 1976, when Robert Burns published articles on Markland in The Dictionary of Canadian Biography and in the pages of Canada’s gay liberation newspaper, The Body Politic, he argued that the Markland investigation was important because it documented “society’s attitude toward homosexuality in early nineteenth century Canada.”[12] Burns’ naming of Markland’s habits as homosexual centered Markland’s “homosexuality” at the core of the inquiry and continues to frame how historians understand the content of File M.

Yet from our historical present that increasingly sees sexuality as fluid and gender expression as complex, the striking thing is not that Markland may or may not have been having sex with men while married to Anne Laird, but that this same-sexuality (which according to testimony at the inquiry had been public knowledge for some time) only came to be understood as the actions of an uncivil civil servant in the midst of political rebellion. It was only then, in 1838, that Markland’s “habits” and his “character” became the objects of conjecture, condemnation, and censure. To recalibrate the Markland inquiry archive historically, then, within the decades-long struggle for responsible government in British North America, may reveal that efforts to institute the new form of colonial rule which increasingly granted more rights and responsibilities to settler men at the expense of women and Indigenous peoples, can also force us to reckon with how matters of intimacy became the business of the state in this part of the world.[13] As historians have shown for England, Australia, and colonial America, men who engaged in acts of same-sexuality increasingly had their own claims to self-government undermined, and by extension, were considered unfit to claim the rights of manly independence.[14] It seems that the 1838 state inquiry into Markland’s habits, then, contained within File M and conducted in the midst of rebellion, provides an opportunity for students of colonialism to interrogate the straightness of the settler state in early-Canada.

Jarett Henderson is an Assistant Professor of Canadian and Colonial History at Mount Royal University (Calgary, Alberta), in the Department of Humanities. His research on the history of colonial Canada revolves around the question of imperial rule in the British North America; he is particularly interested in how empire-wide debates about gender, race, and freedom/unfreedom circulating throughout the mid-19th century British Empire, shaped the struggle to abolish “irresponsible government” in the Canadas. You can find him on Twitter @JarettHenderson.

[1] Library and Archives Canada [Hereafter LAC], RG1 E3, Volume 50, State submissions to the Executive Council of Upper Canada, File M, pp. 209-311. Copies of these records, and other documentation about Markland can also be located at the Canadian Lesbian and Gay Archives in Toronto, Ontario.

[7] LAC, RG1 E3, Vol. 50, File M, August 2, 1838, 311. No one named what it was that Markland was accused of doing in the archival record: rather, File M documents what Ann Laura Stoler identifies as the “epistemic uncertainties” of of the archive itself. Ann Laura Stoler, Along The Archival Grain: Epistemic Anxieties and Colonial Common Sense, (Princeton: Princeton University Press, 2009); and Fiona Paisley and Kirsty Reid, Eds., Critical Perspectives on Colonialism: Writing The Empire From Below, (London: Routledge, 2013).

[8] Catherine Hall, Anna Clark, and Kirsten McKenzie have each argued for histories that critically consider the intersection of the personal and the capital-P “Political”. See, for example, Catherine Hall, “The Rule of Difference: Gender, Class, and Empire in the Making of the 1832 Reform Act,” in Ida Bloom, Karen Hagemann, and Catherine Hall, Gendered Nations: Nationalism and Gender Order in the Long Nineteenth Century, (Berg: Oxford, 2000), 107-36; Anna Clark, Scandal: The Sexual Politics of the British Constitution, (Princeton: Princeton University Press, 2004); and Kirsten McKenzie, Scandal in the Colonies, (Melbourne: Melbourne University Press, 2004).

Featured Image: Markland’s Toronto home was located at the corner of York and Market, just blocks from the Parliament Buildings that housed the Office of the Inspector General. Testimony indicates that it was here that Markland would dine, consume alcoholic beverages, and converse with young Toronto men. Credit: George Norbury, (1856), Toronto Public Library.