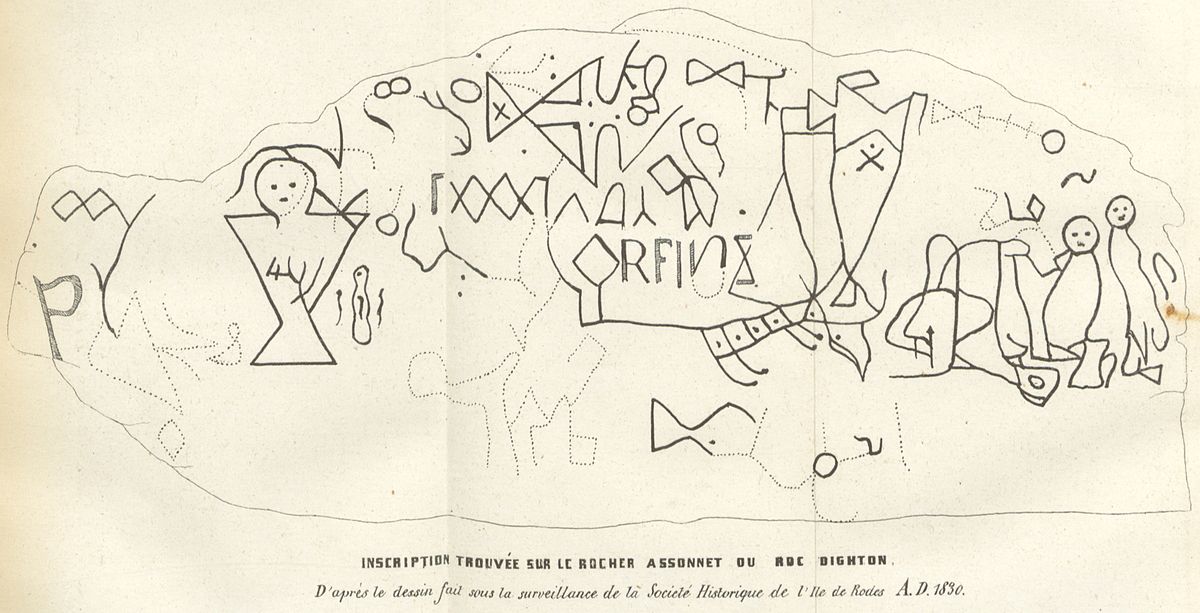 The Vikings are back in North America, athough in truth they’ve been with us since at least the eighteenth century, when the Vinland sagas began to fuel speculation about the lands Leif Eiriksson and his compatriots tried to colonize around 1000 AD. Their latest sighting is at Point Rosee in southwestern Newfoundland, where American archaeologist Sarah Parcak claims to have found evidence of Norse iron processing. If she is right, Point Rosee would be only the second broadly accepted Norse site in North America, after the L’Anse Aux Meadows find of the 1960s.

The early evidence, shaky as it appears to me, was presented on “Vikings Unearthed,” a documentary broadcast by the BBC and PBS on April 6, 2016. Watching the program, I had a twinge of misgiving when Parcak told the camera “I want” the site to be Norse. The desire to place the Norse in North America has a long history of people tending to find what they are looking for. And although it doesn’t seem to be the case with this purported find, claims of Norse discoveries also have a long history of misappropriating Indigenous cultures, Indigenous bodies, and Indigenous materials in an effort to prove a Norse presence.

In my research into processes of colonialism and the historic construction of race and migration theories, I deal with a phenomenon I call White Tribism.[1] The Point Rosee find has nothing to do with White Tribism, but White Tribism has a lot to do with why so many people are fascinated with efforts to prove Europeans colonized North America, long before Columbus. White Tribism comes in several variants, but they all involve the idea that Old World peoples we would recognize as Caucasian, “white,” or northern European (or their Old Testament ancestors) arrived in the Americas at some point in pre-Columbian antiquity. Sometimes these newcomers endured in isolation, surrounded by native savagery. These enclaves included Lost Tribes of Israel still maintaining Judaic practices, and enigmatic Welsh-speaking tribes that supposedly were the degenerated survivors of a colonizing effort by Prince Madoc in the twelfth century. More often, White Tribism posits some kind of interbreeding, as an infusion of European genes and know-how is the only explanation of purported exceptionalities in some Indigenous groups. The alleged improvement furthers the colonizing argument that “pure” Indigenous peoples, as encountered by Old World visitors (including the pesky skraelings of the Vinland sagas), were innately inferior, and that their displacement by white newcomers was (and is) inevitable and just. While White Tribism was part of mainstream discourse well into the twentieth century, it endures foremost in pseudohistorical theories that assert a suppressed white past in ancient America. The best-known example is the controversy over the 9,400-year-old remains of Kennewick Man in Washington State, which were erroneously described as “Caucasoid” when discovered in 1996 and were seized as proof that whites enjoy as much of a claim to the continent as Native Americans.

White Tribism existed in North American exploration and antiquarian literature long before the concept of whiteness as a scientific racial category began to gel in the late eighteenth century. White Tribism really began to fluoresce in the nineteenth century, as Anglo-Americans who embraced the Vikings as ethnoracial kin were keen to have the Vinland of the sagas located right where they lived. They got their wish through one of the most important historical works of the nineteenth century, Antiquitates Americanae (1837). Published by the Royal Society of Northern Antiquaries in Copenhagen, Antiquitates Americanae made the first comprehensive case that the Vinland sagas contained historical truths, and moreover that Vinland was in southern New England. In making the case, its chief author, RSNA secretary Carl Christian Rafn, leveraged every available tool of White Tribism. He turned a well-known Indigenous petroglyph, Dighton Rock in southern Massachusetts, into a runic inscription by Thorfinn Karlsefni of the sagas, publishing a drawing that bordered on scholarly fraud (see image above). Dighton Rock by then had been erroneously assigned to any number of Old World cultures, with Phoenicians the most popular choice. 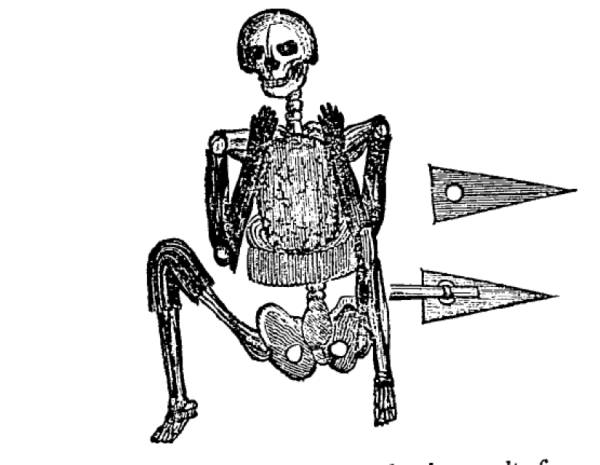 The so-called “Skeleton in Armour” of Fall River, Mass., as illustrated in The American Monthly Magazine, Jan. 1836. It accompanied the article by Harvard historian Jared Sparks that argued it was Phoenician. The burial was a typical Indigenous one of the seventeenth century.

In the RSNA’s journal, Mémoires, Rafn turned a typical Indigenous burial of the seventeenth century, unearthed near Dighton Rock at Fall River, into a bronze-age European. (Harvard’s Jared Sparks, a leading historian of his generation, argued in 1836 the remains, along with the Dighton Rock inscription, were Phoenician.) The Harvard professor and poet Henry Wordsworth Longfellow, smitten with the Gothicist romance of the Norse, turned the Fall River burial into the grave of a Norseman in his poem, “The Skeleton in Armour.”

In Rafn’s correspondence with Thomas Webb, an American antiquarian who assisted him in his American researches (as Rafn never left Denmark to examine evidence himself), he proposed the Indigenous tradition of the giant Maushop was based on an encounter with Thorvall the Hunter of the Vinland Sagas, who must have interbred with the Wampanoag. Rafn also deployed a longstanding if already discredited tool of antiquarian ethnology, finding Old World sources for Indigenous words and placenames. In a letter to Webb in 1839, for example, Rafn explained Mashpee, a Wampanoag community, was originally Másby, “from Más, the name of a man, gen. Más, and byr, by, a town or farm.” As Rafn elaborated in 1840, “these local names furnish a proof that the ancient Northmen have during several centuries inhabited your district.” In 1841 he assured Webb that all Indigenous rock art in North America arose from interbreeding with the Norse: “it becomes easy to explain how skill in the cutting and delineating of inscriptions was transmitted from this race to the other tribes and thus diffused over North America, assuming as we may do, that the pure Indian races acquired the art from that which was mixed with the Scandinavians.”

The idea that Norsemen interbred with Indigenous people, improving them in the process, endured into the twentieth century. Vilhjalmur Stefansson, the Canadian arctic explorer/adventurer, notoriously claimed in 1912 to have found “blond Eskimos,” which earned him a scholarly rebuttal from anthropologist Diamond Jenness. The Norwegian lawyer and adventurer Helge Ingstad, who found the L’Anse Aux Meadows site in 1960, speculated about past interbreeding between Norse men and Indigenous women in In Search of Vinland (1969). “Many Eskimo and Indian women are very attractive,” he explained. It’s not clear if he meant Norsemen would have been attracted to them, or if the women are attractive today because their ancestors interbred with the Norse.

Rafn’s case that Dighton Rock bore a Norse inscription did not endure, but that only left the Indigenous petroglyph available for other White Tribism theories in support of European voyages. Edmund Burke Delabarre, a psychology professor at Brown University, crafted an enduring interpretation of Dighton Rock as an inscription left in 1511 by the lost expedition of Portugal’s Miguel Corte-Real. Delabarre’s scenario had Corte-Real become a leader of the local Wampanoag through his firearms and an innate European ability to lead that reminds me of Peachy and Dan in Rudyard Kipling’s The Man Who Would Be King. “The Wampanoags were a superior race,” Delabarre wrote in 1936, “a fact which might well be accounted for by early white influence and admixture of white blood.” As with Rafn’s scenario, Native Americans only became capable of creating rock art after Europeans showed them how. Delabarre routinely called their efforts “imitative,” and “meaningless scribblings.” Delabarre’s Corte-Real scenario was championed after his death by a Portuguese-American physician, Manuel da Silva, who similarly argued the living Wampanoag were a mulatto hybrid of Portuguese and Native Americans. Today Dighton Rock is housed in a state park museum so cluttered with the bric-a-brac of Portugal’s heroic age of exploration (much of it thanks to the late Dr. da Silva) that it is almost impossible for a visitor not to conclude the Corte-Real theory is correct.

Canada has its own version of the Dighton Rock interpretive misadventure. The Peterborough Petroglyphs in southern Ontario are in a provincial park co-managed by Curve Lake First Nation, but legions of pseudohistory buffs think Indigenous people had nothing to do with the glyphs. Barry Fell, a retired Harvard marine biology professor and self-styled epigrapher, miscast them as the work of a 14th-century Norse king, Woden-lithi, in Bronze Age America (1982), which got the crank theories rolling. In the early 1990s, after retiring from the University of Calgary, the eccentric (and mischievous) hyperdiffusionist and expert on Maya script, David Kelley, argued its glyphs were a proto-tifinagh that originated among the Berbers of North Africa and arrived in Scandinavia. Kelley didn’t explain how proto-tifinagh made it to Scandinavia, but he was plainly tapping into hoary ideas about “white Berbers” being descendants of wandering Norsemen. In 1998, Canadian author Michael Bradley claimed in Grail Knights of North America that on a filming visit to the petroglyphs in 1996 he noticed someone recently had used a grinder to remove a ship glyph that proved the inscription’s European origin. He broadly accused Curve Lake First Nation of the vandalism. I have visited these petroglyphs several times and know well the original site reports and drawings by Paul Sweetman and Joan and Romas Vastokas. There isn’t a shred of evidence that any glyph ever recorded in that location is missing.

“What do the aboriginals have against these glyphs?” Bradley asked. After centuries of White Tribism and misappropriations of Indigenous cultural materials, I would ask in return: what do so many theorists of ancient European voyagers have against Aboriginal people and their cultures?

Douglas Hunter is a postdoctoral fellow at the University of Waterloo whose dissertation, “Stone of Power,” has been awarded a Dissertation Prize by York University. As an author he has won the National Business Book Award and been a finalist for the Writers’ Trust Non-Fiction Prize and the Governor-General’s Literary Award for Non-Fiction. You can follow him on Twitter at @DWHauthor.

[1] This essay draws on my PhD dissertation, “Stone of Power: Dighton Rock, Colonization and the Erasure of an Indigenous Past.” York University, April 2015.

Featured Image: A copy of the symbols or petroclyphes at Dighton Rock, made by the Historical Commission of Providence, Rhode Island, 1830, as published in Henri Wheaton, Histoire des peuples du Nord: ou Danois et des Normands (Paris, 1844). Public domain, via wikimedia. The European lettering in the image appear to have been a concoction of Carl Christian Rafn and his associate, the Icelandic scholar Finn Magnussén.