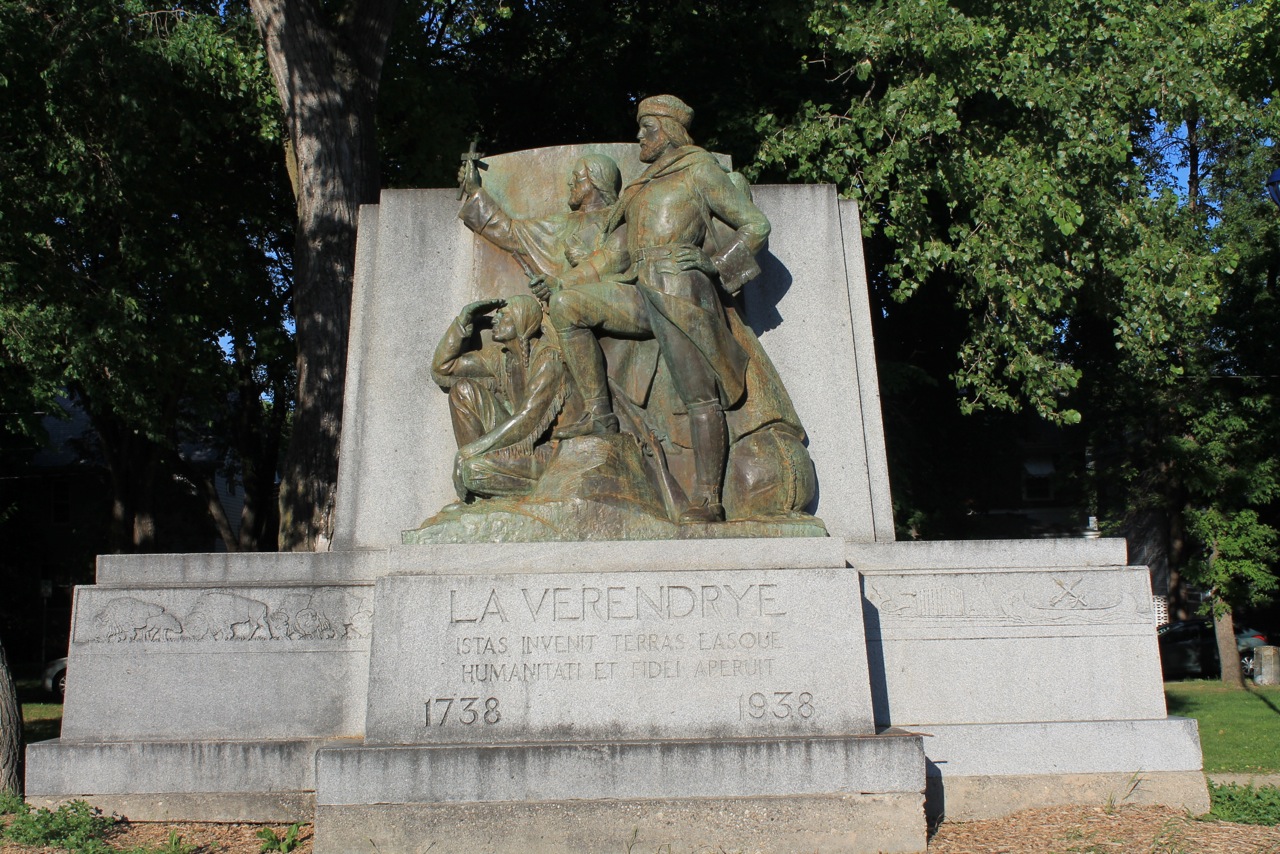 Throughout the 1730s and 1740s, the French established a series of forts northwest of Lake Superior in present-day Northwestern Ontario, Manitoba, Saskatchewan, Minnesota, and North Dakota. French colonial officials hoped that these postes de l’Ouest, or Western Posts, would secure New France’s pick of prime northern furs, which would undermine the English dominance over the fur trade in the Hudson Bay watershed. Secondly, the Western Posts were part of an ongoing French effort to discover a Northwest Passage to the Pacific Ocean; preeminent French geographers of the period surmised that a gulf-like interior sea, which they referred to as la Mer de l’Ouest, or the Western Sea, existed in the middle latitudes of North America. Therefore, the success of these two colonial enterprises would bestow a decisive advantage to the French Empire over its two prominent imperial rivals of the eighteenth century – Britain and Spain.[1]

French metropolitan authorities and colonial officials tasked a succession of colonial officers from the Compagnies Franches de la Marine to form alliances with the Indigenous peoples of the Hudson Bay watershed – Crees, Assiniboines, Monsonis, Ojibwes, and Dakotas. Pierre Gaultier de Varennes, sieur de La Vérendrye, a member of Canada’s military elite and a lieutenant in the Compagnies Franches de la Marine, was the first Commandant of the Western Posts from 1731 to 1743.[2] La Vérendrye stumbled into a complex Native geopolitical situation that involved a protracted and tumultuous conflict between the Indigenous peoples of the region. A coalition of Crees, Assiniboines, and Monsonis fought the Ojibwe and Dakota for control of hunting and trade territory in the Upper Mississippi River Valley and the Northern Great Plains.[3]

Somewhat naïvely, La Vérendrye imagined himself as the metaphorical “father” of all the Indigenous peoples of the Hudson Bay watershed, and sought to unify them into an alliance. Leaning into the family metaphor, La Vérendrye tried to convince the Crees, Assiniboines, Monsonis, Ojibwes, and Dakotas that they were all “brothers and children of the same father” in an expansive French-Indigenous alliance that emanated from the Great Lakes region. La Vérendrye’s reports, journals, and letters to the colonial government wove an imperial narrative, where Crees, Assiniboines, Monsonis, Ojibwes, and Dakotas appeared to conform to French imperial expectations. This French imperial narrative, however, was far from the on-the-ground realities of Native North America. Rather than affirming the realities of Indigenous geopolitics in the Hudson Bay watershed, colonial discourse and the linguistic conventions of the French alliance reflected French fantasies of a paternalistic empire in the heart of North America. Despite the assertions made on colonial maps and writings, French claims of empire remained tenuous and difficult to enforce at the Western Posts. The Indigenous peoples of the Hudson Bay watershed refused to be coerced into a French-mediated alliance.

Any illusions of a French-mediated peace in the Hudson Bay watershed was firmly shattered by 1734 when a Cree and Monsoni war party, armed by the French, raided a Dakota village at Red Lake Minnesota. In 1735-36, Dakota war parties retaliated against Cree and Monsoni villages around Lake of the Woods and Rainy Lake. The failure of French imperial politics became especially evident on June 6, 1736 when a Dakota war party tortured, killed, and scalped a canoe convoy of twenty-one Frenchmen. A colonial report described the grisly aftermath of the raid: “The heads [of the Frenchmen] were placed on beaver robes, most of them scalped.”[4] The Dakota wrapped the decapitated heads in beaver robes to mock the Frenchmen’s strange love for the fur-bearing animal. This was a clear indication that the attack was motivated by economic and military concerns.[5]

The Dakota were aggrieved by the number of guns, munitions, and powder that La Vérendrye was placing directly into the hands of their enemies, the Cree and Monsoni. Before the raid, they had even complained “that they had a grievance against the French for distributing arms to their enemies wherewith to kill them.”[6] The Lake of the Woods raid had dire ramifications for French colonial policy in the Hudson Bay watershed. Crees, Assiniboines, and Monsonis drew La Vérendrye and his surviving sons into a destructive pattern of raiding and warfare that would persist until the withdrawal of the Compagnies Franches de la Marine from the North American interior on the eve of the Seven Years’ War.

Despite the grievous setback suffered by the French at the Lake of the Woods raid, La Vérendrye was attempting to divert trade away from the English Hudson’s Bay Company posts. He strove to discourage Indigenous peoples from trading with the Hudson’s Bay Company, warning them that the English “give you no credit; they do not allow you inside their fort; you cannot choose the merchandise you want, but are obliged to take what they give you through a window, good or bad; they reject some of your skins.”[7] Indigenous traders blatantly disregarded La Vérendrye’s advice, and continued to frequent both French and Hudson’s Bay Company posts as they pleased. In 1738, at Forks of the Red and Assiniboine Rivers (present-day Winnipeg, Manitoba), La Vérendrye angrily confronted a Cree chief who had gone to trade with the Hudson’s Bay Company. The Cree chief retorted that “the Englishman is quiet and does not talk [ill] of the Frenchmen.”[8] La Vérendrye was indeed powerless to demand that the Indigenous peoples of the Hudson Bay watershed trade exclusively with the French. Quite simply, there was no practical reason for the Native consumer to pledge economic fealty to only one European market over another.

Indigenous peoples saw opportunities in having both the English and French establish posts in their territories. Neither La Vérendrye nor the Hudson’s Bay Company emerged as the dominant trading power in the Hudson Bay watershed because Indigenous peoples worked to exploit imperial rivalries.[9] Native traders exploited their position as “middlemen” between the French at the Western Posts and the English at the Hudson’s Bay Company posts.[10] They were savvy market consumers, and sought to manipulate the fur trade by playing the French and English off against each other to achieve the best price for their furs. The inability of either the French or the Hudson’s Bay Company to dominate the fur trade speaks to the agency of the Indigenous peoples of the Hudson Bay watershed. At the Western Posts, Crees, Assiniboines, Monsonis, Ojibwes, and Dakotas rejected French diplomatic overtures because they had little desire or need of French mediation in their territories.

Scott Berthelette is a PhD Candidate at the University of Saskatchewan, who researches the history of New France, the Métis, the Fur Trade, and French-Indigenous relations in North America. His SSHRC-funded dissertation is titled “Between Sovereignty and Statecraft: New France and the Contest for the Hudson Bay Watershed, 1663-1774.” In 2016, he published an article titled “‘Frères et Enfants du même Père’: The French Illusion of Empire West of the Great Lakes, 1731-1743” in the peer-reviewed history journal Early American Studies. You can find him on twitter @S_Berthelette.

[10]Arthur J. Ray, Indians in the Fur Trade: Their Role as Hunters, Trappers and Middlemen in the Lands Southwest of Hudson Bay 1660-1870 (Toronto: University of Toronto Press, 1974), 69-70; Arthur J. Ray and Donald B. Freeman, “Give Us Good Measure”: An Economic Analysis of Relations Between the Indians and the Hudson’s Bay Company Before 1763 (Toronto: University of Toronto Press, 1978).