[This is the ninth essay of the Borealia series on Cartography and Empire–on the many ways maps were employed in the contested imperial spaces of early modern North America.]

In his 1814 “Map of Cabotia,” John Purdy proposed the name “Cabotia” for Canada. Since Purdy noted that any “future improvement” for the map would be welcome, I’ll offer some updates. Working from John Krygier and Denis Wood’s notion that “maps are propositions,” here are some of the propositions Purdy offered on his map: 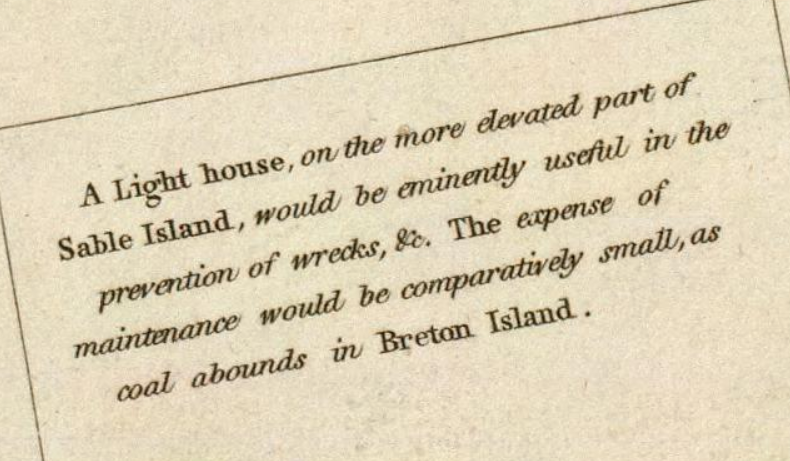 Purdy recommended the installation of a lighthouse on Sable Island; lighthouses were built there in 1872.[1]

The “imperfectly known” territory and “country not yet surveyed” became northern Maine.

While it is generally assumed that “Cabotia” is a name honoring John Cabot, Purdy’s “Map of Cabotia” seems to propose naming present-day Canada after Sebastian Cabot in an elaborate note outlining his many virtues: In his 1876 Geography of Newfoundland, James Patrick Howley supports Purdy’s claim, stating in the very first sentence of the text: “Newfoundland was discovered in the year 1497 by Sebastian Cabot.” In a footnote, Howley details the evidence for this assertion:

It has been a matter of dispute amongst historians as to whether Sebastian Cabot, or his father, John Cabot, was the real discoverer of Newfoundland. I learn from Garneau’s ‘History of Canada,’ and also from a book called ‘The Frozen Zone,’ that although John Cabot the father did accompany his son Sebastian (who was not twenty years of age at the time), the son, being a mariner (which the father was not), really had charge of the expedition.

Debates raged around the date and attribution of Cabot’s landfall, as a flurry of nineteenth century publications attest. In 1897, Henry Harrisse published « Sébastien Cabot, pilote-major d’Espagne, considéré comme cartographe. » In the same year, George Robert Farrar Prowse filed a rebuttal entitled “The voyage of John Cabot in 1497 to North America… Mr. G.R.F. Prowse’s further reply to Mr. Henry Harisse,” as did G.E. Weare with “Cabot’s discovery of North America: the dates connected with the voyage of the Matthew of Bristol: Mr. G.E. Weare’s reply to Mr. Henry Harrisse.” The Cabot debate persists in the historical record and in an ongoing Cabot project.[2]

Whatever the origin of the proposal, it is funny to think that Cabotia (Canada) could have been the country to the north of Fredonia (the United States of America) if John Purdy and Samuel Latham Mitchill, respectively, had gotten their way.

In his thesis, “The Importance of the ‘Map of Cabotia’ in the Early Nineteenth Century Mapping Sequence of Eastern Canada,” Richard M. Malinski notes “that it would be futile to try to impose the name ‘Cabotia’ on this area” (21) and “the name of the Map is an oddity” (5). He argues that this bizarre (“unique”) map was produced mainly for commercial reasons, and he reiterates that “the naming of the Map is an interesting and striking oddity” (57). Malinski concludes:

In a cartographic context the Map does not advance the technique of presenting information or develop new aspects of design. In fact, the Map is a cartographic oddity which produces an impression of a collage and one with a cluttered look.

On the other hand, an online map seller points out:

The Cabotia was of sufficient importance that it was reissued in 1818, 1821, 1825, 1828 (twice), 1838 and, after the maker’s death, in 1850. In the final two states the title was change to Map of the Vice-Royalty of Canada, the name “Cabotia” apparently no longer useful in selling the map. [Perhaps] Purdy was subtly emphasizing the geographic unity of the region and raising the possibility of a “Greater Cabotia” incorporating much of the northeastern United States.[4]

Some of Purdy’s propositions eventually came to pass, but use of the name “Cabotia” for present-day Canada did not. In February 1865, Thomas D’Arcy McGee convincingly argued the case that Canada by any other name would be laughable:

I have read in one newspaper published in a western city not less than a dozen attempts of this nature. One individual chooses Tuponia and another Hochelaga, as a suitable name for the new nationality. Now I would ask any hon. member of this House how he would feel if he woke up some fine morning and found himself, instead of a Canadian, a Tuponian or Hochelagander. (Laughter.)

It would, perhaps, be odd if Canada were named Cabotia, Tuponia, Hochelaga, or any of the other “funny, weird, interesting” proposed names (CBC), but it may be no less odd than the logic behind (mis)naming Canada proposed by the Canadian Heritage Minute.

N.B. The name “Borealia” was also proposed as a name for Canada, but fortunately remained available for the title of this blog.

Amanda Murphyao is a doctoral candidate in the School of Indigenous and Canadian Studies at Carleton University in Ottawa, Ontario, Canada, an institution that sits on the traditional, unceded territories of the Algonquin nation. She researches cartography, caricature, and cartoons in the treaty and broken treaty territories of Canada and the United States.

Malinksi, Richard M. “The Importance of the ‘Map of Cabotia’ in the Early Nineteenth Century Mapping Sequence of Eastern Canada.” MA Thesis in Geography, University of Alberta, 1973. https://doi.org/10.7939/R33R0Q40V

McGee, Thomas Darcy. “Two Speeches on the Union of the Provinces.” 9 February 1865. https://books.google.com/books?id=i44sAAAAYAAJ