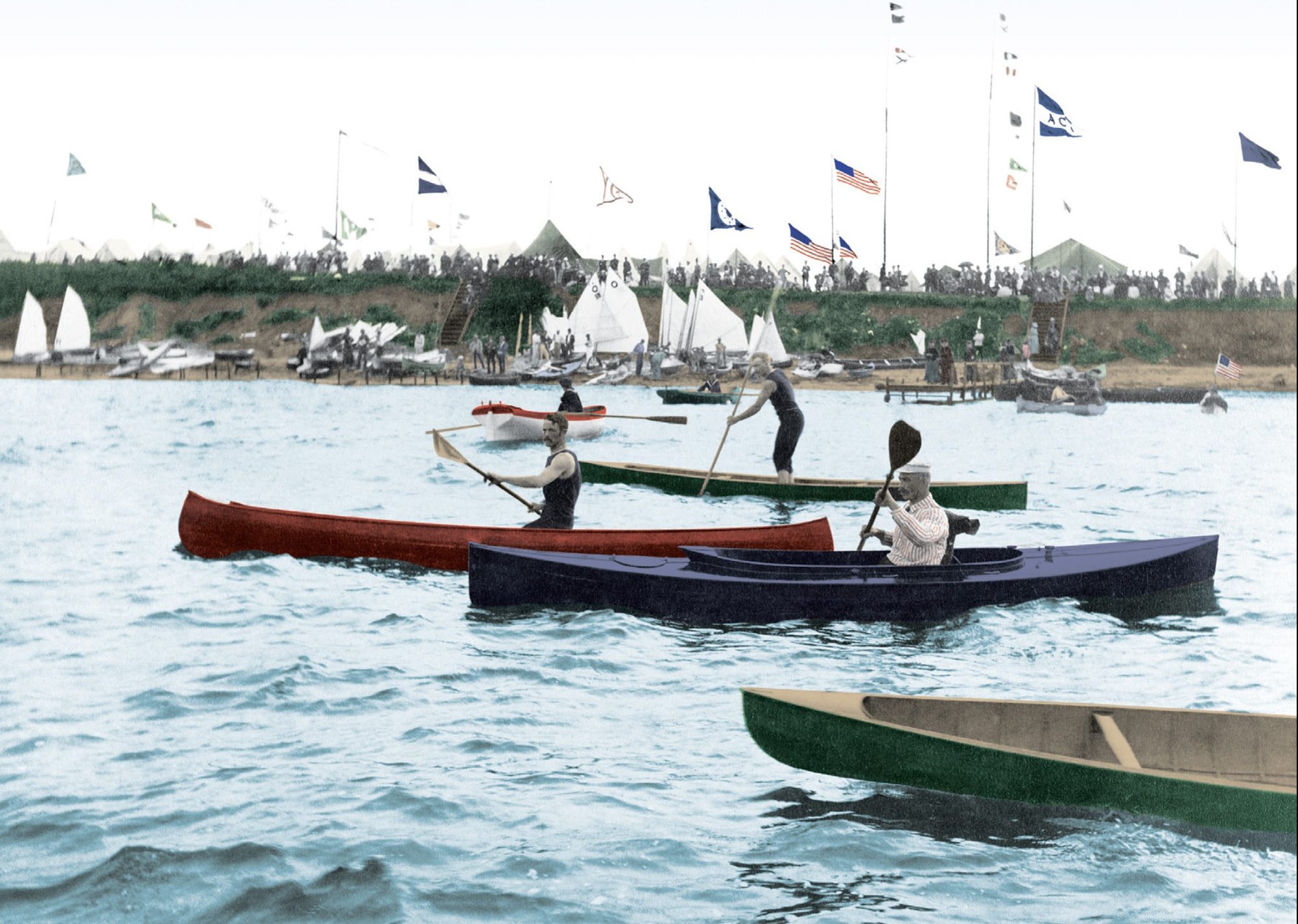 Jessica Dunkin, Canoe and Canvas: Life at the Encampments of the American Canoe Association, 1880-1910. Toronto: University of Toronto Press, 2019.

Canadians are drawn to the canoe. While it leaves barely a ripple in the historiography of nation building, colonialism, and leisure in other countries, Canadian historians have dug deep into the role of the canoe as a technology for travel and trade and as a symbol of nationhood. We can even see how that historiography has evolved over time. Early Canadian economic historians tracked the canoe’s role as a practical tool for nation building during the fur trade era, with trade routes framing the boundaries of what would become Canada. Nationalist and public historians celebrated the as an icon of Canadian identity during the late twentieth century. Over the past 20 years the appraisal of the canoe has become more critical: a new generation of historians have turned on the celebratory renderings of the Canoe and argued that it represents an Indigenous technology that has been co-opted to serve as a tool of colonialism. This appropriation occurred directly in the fur trade but also symbolically with settlers using the canoe to imagine relationship with the North American environment. As Misao Dean suggests, “the canoe allows Canadians like me to construct an identity in which subjectivity and nationality form a seamless whole.”[1] To paddle is to be Canadian. Finally, and perhaps bringing us full circle, historians—and Bruce Erickson and Sarah Wylie Krotz’s edited collection The Politics of the Canoe is a great example—have partnered with First Nations to study how the canoe is being reclaimed by Indigenous people as a tool to strengthen and fortify their communities.

So, like someone setting out for a summer paddle on a popular stream, Jessica Dunkin’s new book Canoe and Canvas: Life at the Encampments of the American Canoe Association, 1880-1910 is entering crowded waters and needs to find its lane. Dunkin’s academic work is firmly in the camp of looking critically at the canoe as a tool of colonialism and for constructing white settler identities. But she’s very much plugged into the latest generation of canoe historiography, flagging in her forward and conclusion how the canoe can be a tool for community recovery. The American Canoe Association provides Dunkin’s go-to archive. The association is alive and well today promoting canoeing and athletic competition in the United States. But Dunkin’s focus is on the association’s formative years in the late nineteenth and early twentieth centuries when it was still building a canoeing community in the United States and Canada and held annual encampments and regattas that skipped back and forth across the border. The ACA archives allow Dunkin to take the canoe in new directions; she’s able to look at it through a transnational lens and dig into the sport and leisure communities that built up around the canoe at the encampments rather than the canoe itself. In other words, Dunkin’s best work comes through looking at the canvas rather than the canoe.

The vagabond life of the early ACA encampments meant they were rebuilt each year: that rebuilding gives us a window into the labour, physical and ideological, that went into creating a community space. Dunkin builds her book around the life cycle of the encampments, giving us chapters that focus us organizing the canoe season, finding new camp sites, creating, governing, living and labouring within those camp sites, and competing in the waters around them. As Dunkin notes the ACA camps were intended to be wild spaces that took campers out of the urban environment, but they couldn’t be “too” wild: camps had to be reachable by late nineteenth-century travel technology and comfortable enough to host a ACA’s members for a couple of weeks. Dunkin demonstrates how North American Victorian society took its show on the road in the nineteenth and early twentieth century. The camps illustrate how boundaries of race, gender, and class played out and were confirmed within the wild but not too wild setting. Dunkin uses a Foucauldian approach to argue that in building the camps, the ACA’s directors hoped to build a community and instill values and beliefs within community members.

As we might expect, the ACA’s written archive only shows us what it wants us to see. But, along with flagging the gaps in the archive, Dunkin turns to photographs of the encampments to expand our vision. Nineteenth-century photographs were more than just fortuitous snaps of the camps but rather were planned and executed by professional photographers to shape how the events were perceived and remembered. They celebrated members of the community coming together within the encampments, but usually cut out the labour needed to create the encampments. Usually, but not always: Dunkin points out that sometimes photographers revealed more than they intended and captured, perhaps tucked into the background of a photograph, the nearly hidden labour of working class women, black people, and Indigenous people who helped set up, run, feed, provision, and provide entertainment and spectacles for the well-to-do campers.

This is a well put together book. The text comes in at a tight 189 pages, while the footnotes, index and bibliography add another 100. The footnotes are packed with extra information that adds value to the book, but Dunkin does a good job of surfacing her intellectual inspirations and demonstrating how they’ve informed her research directly in the main text so that readers don’t have to go digging for it. The book’s eight chapters average around a manageable twenty pages with clear and concise introductions and conclusions to guide readers.

Canoe and Canvas is a useful addition to North American historical studies. The history of the canoe has been heavily weighted to research in Canada; Dunkin gets beyond the Canadian border to demonstrate how the canoe worked as a tool colonization and cultural appropriation in the United States, where it has received scant attention. The canoe is not as dominant a symbol of national identity in the United States as it is in Canada, but it has still been used as a tool by settlers to paddle their way into a relationship with the land around them. Getting beyond Canada helps demonstrate how the canoe was appropriated throughout the Atlantic world and helped embed settlers’ subjectivities within colonial landscapes.

Dunkin adds to sport and leisure studies by demonstrating how leisure spaces like the ACA encampments were constructed both metaphorically and literally and provide a critical tool for fortifying white middle class identity through controlled exposure to and exploitation of racial others. Black people provided the physical labour that built and maintained the camps but also provided the spectacle of minstrels shows, which helped construct the middle-class white audience. Indigenous people provided crafts and entertainment for the encampments, and patrons used their presence to imagine that the canoe was being handed off from the hands of one race to another.

Finally, Canoe and Canvas provides a useful look at how Victorian society established its boundaries, policed its members, and imagined itself in the nineteenth century. The rural setting allows us to see the gears turning as ACA’s directors attempts to create an experience and had to deal with the resistance or counter efforts of ACA members. The directors could set the table, but they couldn’t always control how the meal was consumed. Historians of critical race studies in Canada will find Canoe and Canvas a useful addition to their repertoire when it comes to looking at whiteness was constructed in northern North America. Leisure studies historians will appreciate the book for its conscious attempt to show how recreational spaces were spaces of leisure, consumption, and labour. But Canoe and Canvas will also provide a useful new tool for nineteenth century historians and teachers looking for a book that demonstrates in one tightly-written package how Victorian culture operated.

Dale Barbour completed his PhD in history at the University of Toronto in 2018 and is the University of Winnipeg’s Sandford Riley Post-doctoral fellow for 2021; he is researching the cultural and environmental history of Winnipeg’s rivers. Barbour’s first book, Winnipeg Beach: Leisure and Courtship in a Resort Town, 1900-1967, was published in 2011 by University of Manitoba Press. Barbour’s second book, a look at the history of bathing and beaches in Toronto, is set for release this fall.