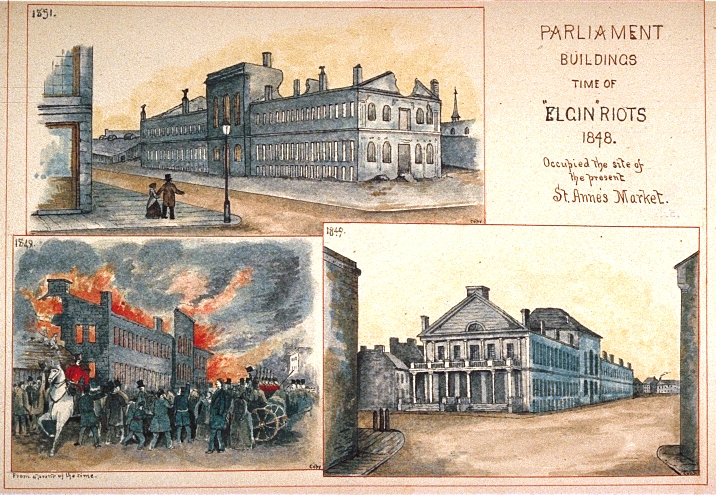 On the night of April 25, 1849, a riled-up crowd of protesters showered Montreal’s parliament building with rocks, stormed through its front doors, and set the building—a repurposed public market in the city’s west-end—on fire. In many ways, the Rebellion Losses Riot stemmed from the same sense of grievance that shaped the unrest at the capitol in Washington on January 6, 2021. It points to an important thread of anti-democratic sentiment that has been a defining, if often unrecognized, feature of North America’s political cultures.

During the spring of 1849, Montreal’s Tories—a political faction composed almost entirely of English-speaking Protestants—found themselves nursing the same brand of political and cultural grievances as the supporters of Donald Trump at the end of 2020. In the recent past they had enjoyed almost unfettered access to the levers of political power in the Province of Canada. The Crown’s decision to adopt the principle of responsible government, though, threatened to have devastating consequences. Suddenly the colonial establishment would no longer be able to count on the Governor to disallow legislation that passed in the province’s elected assembly—a body where Canadiens and other supporters of democratic reform had a sizeable presence. Their loss in the 1848 elections had shown that the Tories could not win power through the democratic process. Like the supporters of Donald Trump who attacked the capitol in Washington in January, these circumstances caused them to turn to increasingly desperate and violent attacks on the legitimacy of their political foes.

The choreography of these two attacks on capitols was eerily similar. Both events started with heated rallies at a distance from their intended target, with leaders carefully nursing the political and cultural grievances of their supporters. A special edition of the virulently Tory Montreal Gazette had summoned the city’s “Anglo-Saxons” to a special meeting on the Champ-de-Mars, the old parade ground on the east side of the city. As the clanging bells of the city’s fire-engines rang out, the protestors were treated to a succession of inflammatory speeches. They were told that this betrayal by the Crown was in the midst of plunging the colony into a state of political tyranny. Under responsible government, Tory luminaries argued, any political faction that could drum up the support of a majority of voters would be able to govern without the steadying intervention of the Crown stepping up and defending a social order constructed around their privilege. This discourse was rife with ethnic hostility; speakers on the Champ-de-Mars warned that Canada was about to be dragged through “the slime of French institutions, French ideas, and French influences.” As the speeches drew to a close, the crowd was urged to make their way by torchlight to parliament.

The actions of the Tory crowd once they reached parliament also bore a marked resemblance to those of Donald Trump’s supporters at the American capitol in January. The intentions of these Tory rioters were clear. Unable to assert themselves as victors in the democratic process, they sought to intimidate their rivals and cast doubts on the legitimacy of the colony’s political institutions. They chanted and hollered, sang and threw stones. Finding little in the way of security after their political allies in parliament had shot down calls to summon the troops from the garrison, they made their way into the building and on to the floor of the legislature, where they interrupted the business of parliament that was still in session, shouting and shuffling papers on the desks of parliamentarians. A portrait of Queen Victoria was torn down from the wall and kicked, while another protestor made off with the ceremonial mace, which they raucously paraded through the streets. As this was occurring, some of the protestors had scaled one of the gas streetlights, bending it towards the ground until its flames touched a curtain billowing out of a window. In a matter of moments, the wooden edifice was in flames, and those who remained inside rushed out of the building onto the streets. One can imagine the same sneering expressions on the faces of Tory rioters in 1849 that we witnessed amongst those who attacked the capitol in Washington in January. The fire lit the night sky for hours, as Montrealers gathered to bear witness to the scene. Violence continued to break out on the streets in the weeks ahead. The city was quickly declared too turbulent an environment for the work of colonial administration to be carried out, and the capital was moved west to Toronto.

During the postwar period, the burning of Montreal’s parliament was often portrayed by historians as a colourful curiosity, a symbol of just how deeply embedded sectarian tensions had become in British North America prior to the nation-building exercises of the late nineteenth and early twentieth centuries. The crisis in democracy unfolding on a global scale ought to be nudging us to see this in a different light. It pushes us to consider an anti-democratic thread, rooted in racism and chauvinism, that runs through the histories of countries like Canada and the United States. It reminds us of how vulnerable democratic principles are to the toxic forces of violence and structural inequality. Celebratory narratives of the march towards democracy glossed over these processes of exclusion while exaggerating the commitment to democratic principles amongst many segments of the elite. Democracy in Canada and the US persists despite concerted efforts at various times to curtail the participation of a majority of people living in these societies—women, Blacks, migrants, Indigenous peoples, non-citizens, and youth. These same forces also worked to extinguish democratic engagement in other spaces, like schools, workplaces, hospitals, and on the streets. As we enter into the second decade of the twenty-first century, events have drawn our attention to the precarity of democracy. Reflecting on the types of assertions and arguments made to justify and resist the revocation of democratic practices in the past seems, more than ever before, like a vital act of engaged citizenship.

Dan Horner is an associate professor in the Department of Criminology at Ryerson University and a member of the Groupe d’histoire de Montréal. He is the author of Taking to the Streets: Crowds, Politics, and the Urban Experience in Mid-Nineteenth-Century Montreal. You can find him on Twitter at @DanHorner5.