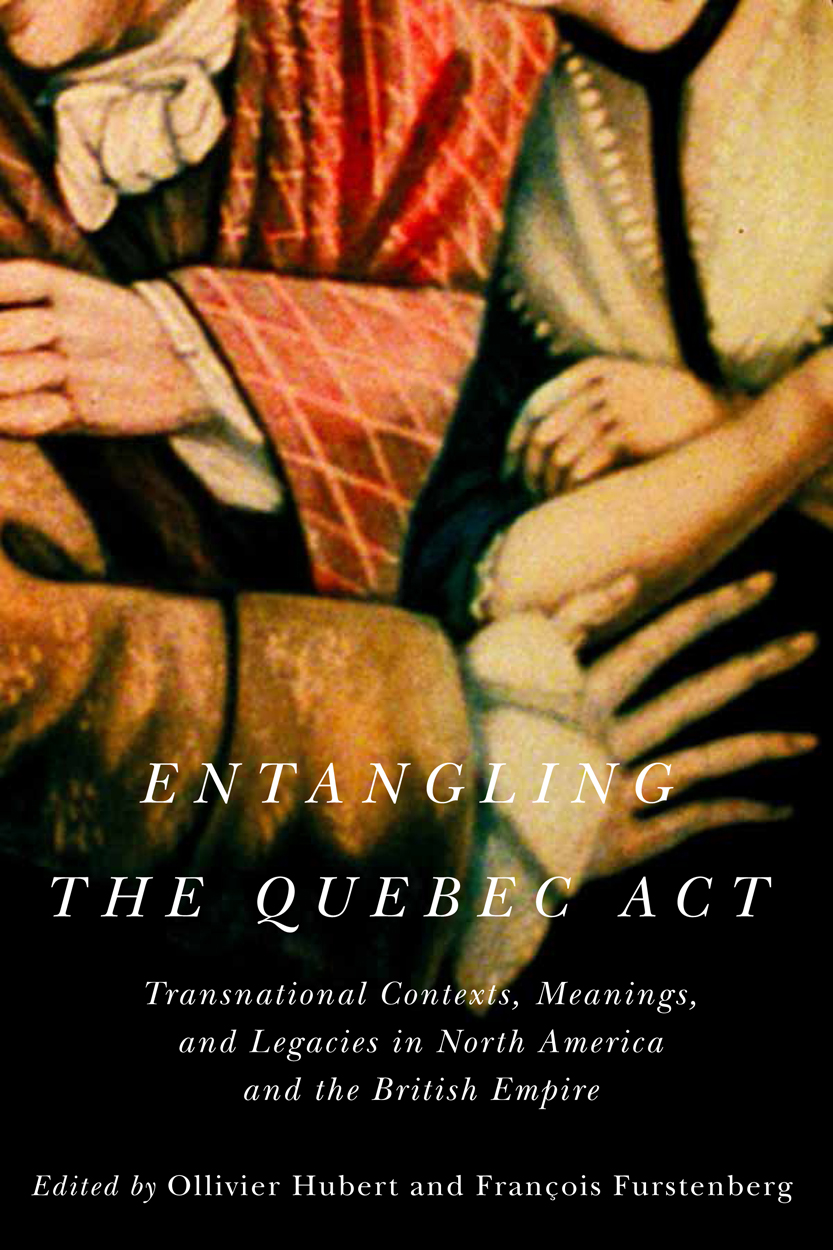 In Entangling the Quebec Act: Transnational Contexts, Meanings, and Legacies in North America and the British Empire, editors Ollivier Hubert and François Furstenberg present a series of ten original essays by historians working in North America and Europe representing the first dedicated study of the Quebec Act since Philip Lawson’s seminal work on the integration of Quebec into the British empire over thirty years ago.[1] “Operating at multiple scales of spatial analysis and juxtaposing multiple historical perspectives” (4), Entangling the Quebec Act is transnational in its geographic and historiographical scope, entangling Canadian and American national histories, Indigenous history, and British imperial history in an histoire croisée of legal, political, religious, and cultural analyses of the Quebec Act’s origins, effects, significance, and legacy. And indeed few other singular eighteenth-century events could have welcomed such a broad and complex range of methodological and thematic approaches. Passed by the British Parliament in June of 1774, the Quebec Act was intended to more firmly establish the constitution of the Province of Quebec, which had been in a state of relative limbo since France’s cession of Canada in the Treaty of Paris of 1763. Key features of the Act included confirmation of the “free Exercise” of Roman Catholicism and the maintenance of the Catholic Church in the province in its “accustomed Dues and Rights,” the retention of “the Laws of Canada” “in all Matters … relative to Property and Civil Rights,” provision for the governance of the province by “the Governor and Council of Quebec,” and the extension of the province’s boundaries beyond the St. Lawrence Valley and through the regions surrounding the Great Lakes to the confluence of the Ohio and Mississippi Rivers.[2]

The Quebec Act represented a dramatic shift in British imperial governance away from an imperial project that was predominately “Protestant, commercial, maritime, and free,”[3] to “a more pluralist model of empire,” as Aaron Willis writes in his contribution to Entangling the Quebec Act, whereby “flexible attitudes towards non-Britons and their traditions replaced strategies of assimilation based on state formation” in the British Isles (165). Willis therefore interprets the Quebec Act as a corrective to “the failed Irish experience” (27) of forced assimilation of a Catholic population resulting in poverty, political insurrection, and a perpetual (and expensive) British military presence. The innovative policy of Catholic toleration articulated in the Quebec Act’s outline for a Canadian Catholic Church—“subject,” of course, “to the King’s Supremacy,” and headed since 1766 by a bishop preferred by authorities in London rather than Paris[4]—had the effect, as Luca Codignola’s piece suggests, of connecting Canadian Church authorities to ecclesiastical networks spanning the Atlantic world and more closely linking the Canadian Church to the Holy See. The Act’s breaking of the intimate historical ties between the Canadian Church and the Church in France gave the former “an unprecedented level of autonomy from the state” (28), the separation of which generated a degree of comfort sufficient for the toleration of Catholicism in Britain inaugurated by the Relief Acts of 1778 and 1791.[5]

British Americans remained suspicious of the Act’s establishment of a Catholic Church on their colonies’ doorsteps, however, as evidenced in Brad A. Jones’s examination of reactions to the Quebec Act in the New York and Halifax press. In both locations the Act “catalyzed latent but powerful” anti-Catholic sentiment (29) and was viewed as an imperial revocation of the Revolutionary Settlement and a breaking of the king’s Coronation Oath, both of which amounted to a rupture of imperial sovereignty and a justification for colonial rebellion. Protestantism, as Willis writes, was seen as a “bulwark against despotism and disorder” (165–6), and the Act was received by many colonists as proof of the existence of a plan for the arbitrary government of the colonies by imperial authorities. Not dissimilarly from the Act’s contemporary colonial opponents, Christian R. Burset reads the Quebec Act’s provision for French civil law in the province as politically motivated by a group of what he calls “authoritarian Whigs,” who sought to limit colonial participatory politics, divide colonial subjects, and reinforce the colonies’ economic subordination to Britain. Perhaps more persuasive are contributions by Donald Fyson and Michel Morin, both of which posit that the Quebec Act was less innovative than has been conventionally appreciated. Fyson argues against the notion of the Quebec Act as a seminal moment in French-Canadian nation making, methodically demonstrating how many of the Act’s key features were constitutional confirmations of legal and political accommodations that had emerged in the fifteen years since the conquest. While Morin examines how the precise formula of French and English legal pluralism expressed in the Act was the product of a close study of Canadian legal custom and the dualism of French and English legal forms in post-conquest practice.

Jeffers Lennox, meanwhile, contends that the Quebec Act’s greatest significance among contemporaries was its extension of the province’s boundaries into the North American interior, a feature which frustrated colonial efforts at trans-Appalachian expansion. The Act’s boundary clause is also the subject of Kristofer Ray’s essay, which situates the Quebec Act within the context of Ohio Valley geopolitics. As an attempt to bring order to the chaos of colonial Indian policy by placing Indigenous relations under the centralized authority of officials at Quebec, “the Quebec Act was the victim of poor timing,” Ray writes: “its centralizing tendency ran exactly counter to the radical arguments gaining steam in the thirteen seaboard colonies” at the very moment of its passing (324). Yet jurisdiction over Indigenous diplomacy would ultimately fall to the central government according to the Articles of Confederation of 1781,[6] and all of that territory which had been within the purview of the Quebec Act and was ceded to the United States by the Treaty of Paris in 1783 became federal jurisdiction under the Northwest Ordinance of 1787,[7] indicating an eventual realization among the American founders of the “merit in the powers invoked by the Quebec Act” (324). Finally, Alain Beaulieu examines the Quebec Act’s implications for Indigenous land rights in Canada and finds the Act to be a silent extension of the Royal Proclamation’s programme for the cession of Indigenous lands exclusively by Crown treaty.

Britain’s acquisition of Quebec in 1763, along with the British East India Company’s attainment of de facto sovereignty over Bengal by the Treaty of Allahabad in 1765, expanded Britain’s imperial dominions to include jurisdictions and territories home to substantial populations of non-Britons, non-Protestants, non-Christians, and non-Europeans, the result of which was a fundamental revaluation of notions of British imperial subjecthood. The Quebec Act’s establishment of cultural, religious, and legal pluralism in an imperial province by Act of Parliament, as Hannah Weiss Muller concludes, “marked a moment when a truly imperial subjecthood was imagined and realized—a subjecthood that could accommodate the many peoples and the many laws of the British Empire” (64). Entangling the Quebec Act is an excellent assemblage of diverse yet integrated scholarship which is sure to be of value to Canadianists, early Americanists, and those working in Indigenous and eighteenth-century British imperial history alike.

Adam Nadeau is a PhD candidate at the University of New Brunswick, where his research examines Parliamentary legislation and its effects on imperial governance in eighteenth-century British North America and South Asia.

[1] Lawson, The Imperial Challenge: Quebec and Britain in the Age of the American Revolution (Montreal and Kingston: McGill-Queen’s University Press, 1989).

[6] See Articles 6 and 9 of the Articles of Confederation, March 1, 1781, Avalon Project: Documents in Law, History and Diplomacy, https://avalon.law.yale.edu/18th_century/artconf.asp.