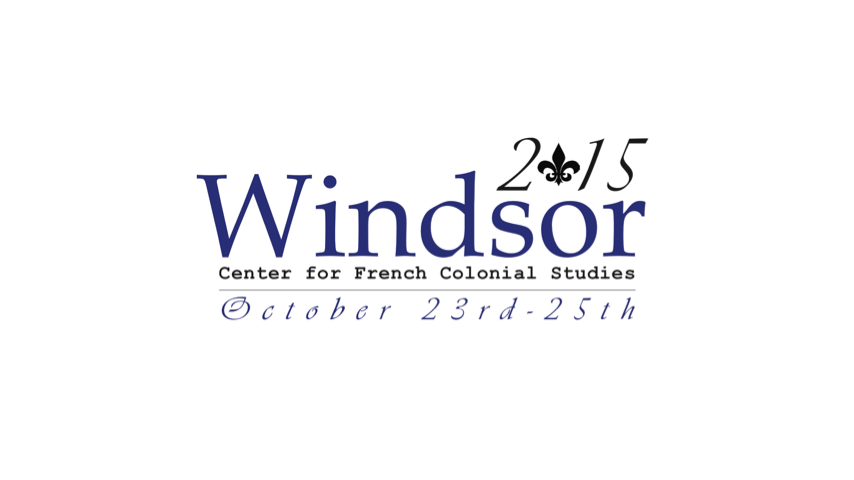 By the end of the French regime in North America in 1763, New France stretched along the waterways leading from the Canadian Maritimes down the Saint-Lawrence River, and to the Great Lakes down the Mississippi valley to New Orleans. Covering such a large part of North America, it is not surprising then that after the Seven Years’ War, France’s claims were divided between states, provinces, and countries. Yet, the Detroit-Windsor region is an excellent example of two border communities still bearing a semblance of unity, bound by their common origin under the French fleur-de-lys since Antoine Laumet, dit de Lamothe Cadillac, first founded the French settlement along both sides of the river. This past October, a few days away from Halloween, Cadillac’s spirit hovered over the Detroit-Windsor region a little more gleefully knowing that his memory was very much alive. Indeed, this year’s meeting of the Center for French Colonial Studies was being held on his old stomping grounds. The founder of Détroit was not the only topic of the moment, however, as other characters, both famous and obscure, shared the spotlight throughout the various talks.

This colloquium was a fitting occasion to also commemorate the region’s fait français, as Ontario is currently celebrating 400 years of Francophone history and presence. Hosted by the University of Windsor, the meeting was mainly organized by Assistant Professor of History, Guillaume Teasdale. The three-day event was divided between a wonderful reception dinner on Friday (held at the recommendable Mazaar Restaurant), a full day of conferences on Saturday, and finally, a pleasant Sunday visit of the François Baby House (Windsor’s Community Museum, soon to be renamed Museum Windsor) and the Duff-Baby House. As it does every year, the Fort Saint-Joseph Archaeological Project had a strong presence thanks to a poster exhibit, and attendees could also learn from the student poster presentations in the hall.

Divided into four panels, the actual conference day had a full schedule, with many talks worth highlighting. In the envious position of getting the ball rolling was Cathrine Davis (Laval University) with a fascinating talk on the history of textile production and trade between France and North America through the study of lead seals (“De fabrique à fourrures: Lead Seals as Witnesses to the Colonial Textile Market”). Besides discussing the function of these obscure little artefacts, found in all trade sites of North America, Davis explored how the Native trade economy transformed parts of the textile production economy of many regions in France; thus reminding us that Native history is an intrinsic part of the wider Atlantic world.

Following suit was Sara Chapman Williams (Oakland University). Her talk, “Early Detroit for Parisians: Cadillac’s Description’ of 1701,” described how Cadillac consciously crafted his description of Détroit according to literary tropes and clichés in order to convince his benefactors to allow him to found a new settlement. All in all, a wonderful example of re-examining source material under a new light.

Finally, ending the first panel was Guillaume Teasdale’s talk “Cadillac’s Family and the Ownership of the Detroit River Region”, exploring the prickly question whether Cadillac was indeed a seigneur as he claimed, and, if so, of what? Although he is still researching the question, Teasdale nonetheless gave us tantalizing clues that seem to indicate that, at the very least, Cadillac did believe wholeheartedly his title had been legitimized and officially recognized.

The second panel delved into lesser-known aspects of Detroit’s regional history. My own presentation, “Rediscovering Passerat de la Chapelle, Second in Command at Fort Détroit (1759-1760),” was a short recap of the titular character’s military retreat from Detroit to Louisiana, following his refusal to surrender to the British in 1760. (Might I also permit myself a moment to shamelessly plug the fact his full story will be published in my new book in early 2016.)

Marcel Bénéteau (University of Sudbury) then presented “The Félix Drouillard Song Manuscript (1897-1903): A Detroit River French Family Repertoire.” This source, which, as far as Bénéteau knows, now only exists as photocopies in his possession, is a treasure trove of French traditional songs. Comprised of 279 songs, 47 of which are English and the rest French, this source is priceless to linguists, historians, and ethnographers.

Robert Janisse, a independant scholar, then entertained us with his comparisons of family tradition versus actual source material in retracing his family genealogy. Titled, “Fact or Fiction: Stories my Grandfather Told Me,” his talk was an illustration that oral tradition, like any source, must be scrutinized, challenged, and verified.

The final panel was by far the most important regarding Native history. Andrew Sturtevant (University of Wisconsin-Eau Claire) gave new insight in the complexities of Native history with his talk “Pontiac’s Other War: Intertribal and Imperial Politics in 1763 Detroit.” Echoing the theme of conflict, Karen Wawrew Travers’ “‘Whence all this misery?’”: Anishinabe Lands and European Settlement on the St. Clair River, 1800-1860” was an important discussion on European settlement on Native land.

Finally, Carolyn Podruchny’s keynote speech was one of the most fascinating. Her talk, “Telling Stories in the Fur Trade: Jean Cadieux and the Evolution of Voyageur Identities” was the second welcome foray into ethnography. Through the comparison of many versions of Cadieux’s story, Prodruchny illustrated how we can tease out the way Voyageurs saw themselves through the various iterations and roles given to the titular character in each retelling.

The CFCS remains the go-to conference for French colonial research within the American Mid-West. Its strong suit is the interdisciplinary dialogue among various fields of history, archaeology, genealogy, and ethnography, all under the banner of French colonial research. If there is one negative aspect I must point out, however, it is the severe lack of Francophone members. To be fair, some of my French-Canadian colleagues on this side of the “glass wall” have expressed curiosity regarding the CFCS. One can only hope they will actively engage in future meetings to assure that the CFCS becomes not only interdisciplinary, but boundary-crossing as well.

And in that spirit, I invite all my colleagues, both American and Canadian, to join in on next year’s edition of the annual CFCS meeting, which will be held in Ste. Geneviève, Missouri. See you there!

Joseph Gagné is a PhD Candidate at Laval University. He is the creator of Electronic New France at www.novafrancia.org.