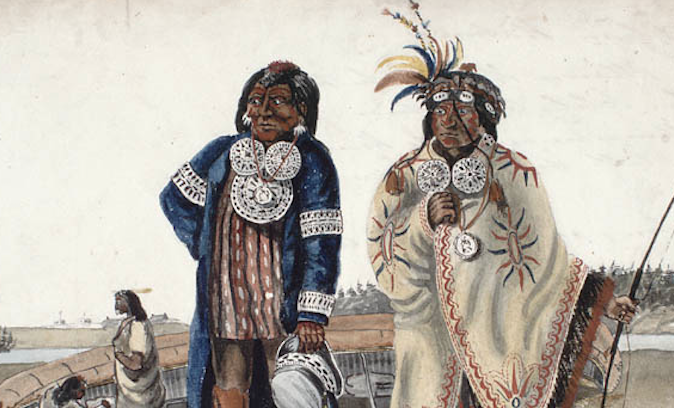 This post is the first in a series of essays on Anishinaabeg participation in the War of 1812. The posts were previously published at ActiveHistory.ca and, in a modified version, in the July 2012 edition of the Ojibway Cultural Foundation newsletter.

It is well known that the Anishinaabeg (Ojibwe, Odawa, Potowatomi, Mississauga, Algonquin, and Nipissing) fought during the War of 1812, the majority siding with the British, although some sided with the Americans. It is also well known that Shawnee Chief Tecumseh was a dynamic and charismatic leader who worked to form a confederacy of Nations to resist American expansionism. The War of 1812 is synonymous with the names Tecumseh, General Brock and Laura Secord. If any other “Indians” are mentioned, it is likely Tecumseh’s brother the Prophet (another Shawnee), Roundhead (A Wyandot), or John Norton (a Scotchman with Cherokee blood and adopted by Mohawk Chief Joseph Brant). Many would be hard pressed to name ten Anishinaabe warriors who fought in 1812. We know that our ancestors fought during this war, and that some died in battle. The majority of the Canadian population, as well as our own people, however, likely cannot name many Anishinaabe chiefs or warriors who fought, which is a shame because the sheer numbers of Anishinaabeg that participated should warrant more attention.

It was estimated that at the time war was declared, there were 8410 warriors of the “Western Indians.” The Western Indians included Ojibwe, Odawa, Potowatomi, Huron, Shawnee, Mississaugas, Nipissings and Algonkians. The Ojibwe, Odawa, and Potowatomi made up 7410 of this number, an overwhelming majority. So even though the Shawnee participated, and their war chief is the one most associated with the war, it was the Anishinaabe (Ojibwe, Odawa, Potowatomi) that formed the majority. Unfortunately, they do not receive much attention or credit, they are absent from popular consciousness.

One of the first major strategic actions embarked upon by the British was to take Fort Michilimackinac, which they knew would strengthen their alliance with the Anishinaabe. On July 17, 1812, Fort Michilimackinac was captured by a force led by British Army Captain Roberts, with his 30 soldiers, 200 Canadian voyageurs, 113 Sioux, Menominee, Winnebago and 280 Odawa and Ojibwe. This victory, although at the periphery of the main “theatre of war” was critical in solidifying the British-Anishinaabe alliance. The British absolutely needed the Anishinaabe as allies because the majority of their trained soldiers were in Europe fighting Napoleon. The composition of Roberts’ force: 30 British soldiers and 393 “Indians” demonstrated that discrepancy in force. Imagine if Captain Roberts landed at Michilimackinac with 30 British soldiers (who he labeled as old and given to drunkenness) and 200 Canadian voyageurs – would the victorious result have been the same?

Even though the Anishinaabeg detested American expansionism, they distrusted the British because of previous events, specifically the Battle of Fallen Timbers in 1794. At that battle against the Americans, the British retreated into Fort Miami and as the Anishinaabeg attempted to retreat into the fort as well. They found that the gates to the fort had been locked! The Anishinaabeg had to make a stand and fight the Americans on their own and they suffered a crushing defeat. Although this battle occurred near present day Toledo, Ohio, miles away from Michilimackinac, the Anishinaabeg were there and they remembered. In council on August 23, 1812 at Michilimackinac, after the taking of that fort, L’Arbre Croche Odawa Chief Keminichagun (Giiminiijaagan ‘The Bastard’) reminded British Captain Roberts of this incident:

My Father – When you formerly undertook a game with the Americans you invited us to take a [show] in the [sport] after exerting yourself to the utmost you were thrown on your back and we alone were left to support the [weight] of the contest as a proof of which throw your eyes in every direction and you will behold the bones of our friends scattered on the [plains]. At that time the Americans were few, they have since increased and are as numerous as the leaves of the trees. I have witnessed their numbers and their strength in traveling through their country. Notwithstanding this when we were called upon at St. Josephs, we immediately followed you and assisted you in turning out the Americans from the place which you now occupy and we do not think that your force was sufficient without our assistance.[1]

Today I am come to tell you my Father and once more request you to pay attention to my words, do not be angry with me nor speak to me harshly. All I seek for is the protection of our women and children to secure this. I have now to tell you that I am not an Englishman nor a Frenchman, neither am I an American, but a [mere] Indian and as such I am determined to remain.

He made an express statement of self determination and stated the needs of his family, clan, village and people. He even asked the captain “My Father – Why do you bring us forward in any quarrels you may have with those who wear hats [Americans], when we fall out among ourselves, we ask not for your assistance.” Giiminiijaagan later vowed to remain neutral for the remainder of the “contest” (he later rejoined the fight against the Americans).

Although at that point in the war some Odawa remained neutral, other Anishinaabeg who were at Michilimackinac left for Detroit immediately, and others later. Indian Agent and Store Clerk John Askin reported from Michilimackinac that on August 16, 1812, “Big Gun [Kitchi-posekizegan ‘Gichi-baashkizigan’] and 270 warriors left for Detroit.” Once again we are left with incomplete information about a large group of “Indians,” at least the chief’s name was recorded in this instance but the 270 warriors remain nameless. These warriors would not have been at the Battle of Fort Detroit because it occurred on the day they left. The course from Michilimackinac to Port Huron (north of Detroit) is 204 nautical miles, and it is likely this war party left as a canoe brigade which likely added time to their travel.

In much of the literature the Anishinaabeg, and other nations, are described as “Red Pawns” or merely “blood thirsty savages” who will go to war just to spill blood. Rarely have they been described as people who have genuine human needs and aspirations. Instead of following blindly into war, the Anishinaabeg weighed their options, and then made their decision. This decision making process was swift for some and slower for others. The slow, deliberate, careful decision making process was usually depicted by contemporary commentators as perfidy, fickleness, or treachery.

The war chiefs and civil chiefs deliberated on the course of action to be taken. Sometimes this led to the splitting of families. In fact, the previously mentioned Giiminiijaagan had nephews named Assiginack, Makadepinesi, Wakezoo, who had sided with the British, however, their other brother, Ningweegon “The Wing” cast his lot with the Americans. The fact that one of these four brothers sided with the Americans reveal that the Anishinaabe society was not made up of a homogenous group of “Indians.”

The British also reported in their correspondence that some of the Odawa had shown up to take Michilimackinac but that there was a contingent of warriors also waiting on another island to see how the battle would turn out before they engaged. Instead of being “bloodthirsty,” the Anishnaabeg actually were thinking of their women and children, as well as their land and interests (i.e. fur trade partners). This is another stereotype to combat, the idea that the Anishinaabeg had no other motivation other than the command from their “Great Father.” The War of 1812 was an opportunity for the Anishnaabeg to solidify the hold on their land and territory and repulse American expansion. Many joined up to fight for their land, others surely did fight for war honours, and others fought for the protection of their women and children.

There are numerous Anishinaabeg that participated in the taking of Fort Michilimackinac (393 Indians), the taking of Fort Detroit (600 Indians –Six Nations largely did not participate at Detroit), as well as other battles along the Detroit Frontier and on the Niagara frontier but there are numerous difficulties in “putting a name to the face” at specific battles because the British officers and Indian Department Officials did not maintain a muster roll, as was done for the British Army and the Militia. So we have to rely upon the statements of the chiefs in subsequent years, or in Indian Affairs correspondence. Sometimes the Anishinaabeg would merely state that they fought in the War and were never absent, winter or summer, but did not list specific battles.

Over the coming months, as a way to recover Anishinaabe experiences during the war, I will profile a series of Anishinaabe participants from the conflict. In doing so, these posts will reveal the important role of the Anishinaabeg during the War of 1812 as well as their central place in the Great Lakes region.

Alan Corbiere is Anishinaabemowin Revival Program Coordinator at Lakeview School, M’Chigeeng First Nation. He can be contacted at alcorbiere@gmail.com.