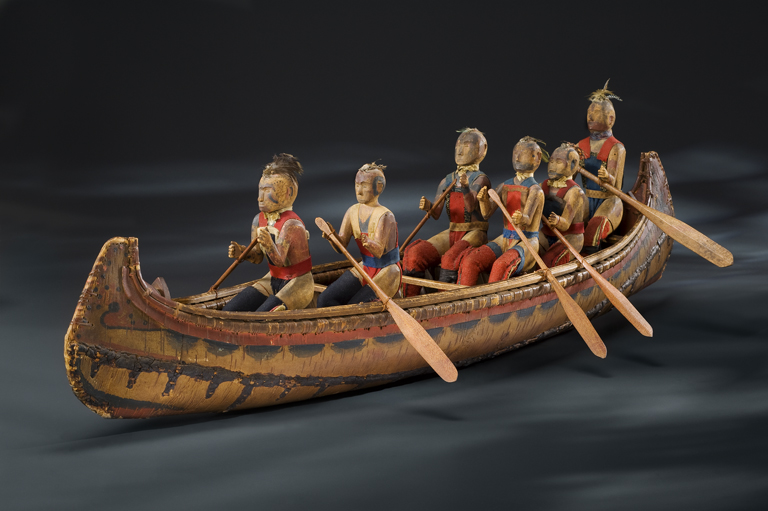 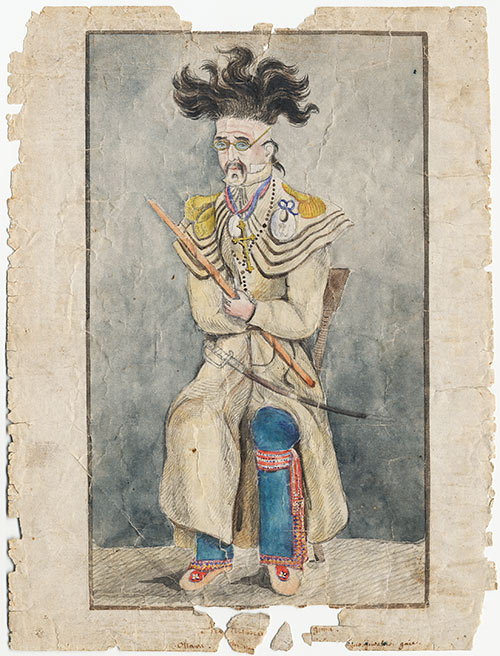 On July 17, 1812, Captain Roberts with 30 regular British soldiers, who he described as aged and given to drunkenness, along with 200 Canadian voyageurs, 113 Sioux, Menominee and Winnebago, and 280 Ojibwe and Odaawaa, captured Fort Michilimackinac. This first victory ignited the Western Confederacy to war and many warriors came out to fight the Americans. Captain Roberts later revealed that he had learned that a force of Odaawaa warriors from L’Arbre Croche (a grouping of villages south of Michilimackinac) had landed at another part of Michilimackinac and watched from that vantage point. He alleged that this force was to wait and see how the battle was going, and then join the winning side. Clearly the mistrust was on both sides. However, the victory bolstered the spirit for war and many warriors proceeded to Detroit.

Many chiefs and warriors heard these promises but were likely going to fight anyway. The Odaawaa Chief Mookomaanish, Awaasizii (Brown Bullhead) clan, of Cross Village (a part of L’Arbre Croche) rallied his young men, raised a war party and left his northern home to fight the Americans in the south. Chief Mookomaanish’s name was translated as “Little Knife” but it is more correctly translated as the darn or damn knife. He was also known as Frederic Pebamitapi (Bebaamidaabii) “He who drags it along.”

We do not know when or where Mookomaanish was born but we do know that he fought during the War of 1812 alongside the British. He apparently distinguished himself and was awarded a silver mounted sword for his bravery and compassion. Lieutenant Colonel Robert McDouall, who had the command at Michilimackinac in 1814, had given the sword and the following certificate to Chief Mookomaanish:

I do hereby certify that the bearer hereof, the Ottawa Chief, the Little Knife, is an Indian of a most respectable character, a brave warrior, and has always been distinguished for his loyalty and attachment to the British Government. His six brothers are also highly deserving, and I strongly recommend the whole to the kindness and protection of the future commanding officer of His Majesty on Lake Huron. I perform this duty with the more pleasure from the noble act of mercy and generosity shown by the said Chief the Little Knife to a Young American whom he took Prisoner on the Wabash and who had previously wounded him by not only sparing his life, but by bringing him with kindness and attention to this Garrison. In testimony of my approbation of his conduct upon this occasion which will be so gratifying to the King, his Great Father, and to encourage similar acts of mercy (in future) to the vanquished and unresisting, I, in his name, present him with a silver mounted sword, in token of his merit. Given under my hand and seal at Michilimackinac this 8th day of June 1815 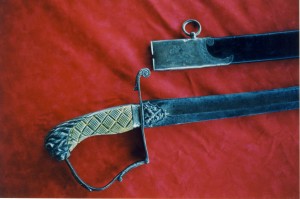 This certificate and sword was kept in the Mookomaanish family and was passed down to his grandson William Kinoshameg. The descendants of Mookomaanish state that the sword was removed from the possession of the family under dubious circumstances. It is now at the Canadian War Museum in Ottawa. Close by, in Gatineau, Quebec, at the Canadian Museum of History, is another item related to Mookomaanish. It is called “Assiginack’s canoe.” Odaawaa Chief Jean Baptiste Assiginack (who was also from L’Arbre Croche) made a model war canoe to commemorate the war chiefs who assisted the British during the War of 1812. This canoe was, at one time, accompanied with a note written on birch bark that identified the members in the canoe. Apparently, the birch bark note has been “lost” but the contents were recorded in an article by J. Garth Taylor published in the Beaver History Magazine of October-November 1986. Taylor reported:

Mokomanish, with nine of his young men, had fallen upon a party of Americans on the River Wabash. During the fray, in which the chief received a ‘severe wound’ in his knee, he and his warriors killed nine U.S. soldiers and took one prisoner… Mokomanish was praised by the whites for treating his prisoner with humanity, but that his own tribe reproached him a fool for allowing a prisoner who was completely in his power to live after having been wounded himself.[2]

Consulting Helen Hornbeck Tanner’s “Atlas of Great Lakes Indian History” we see that the river Wabash runs through the states of Indiana and Illinois and that there were three major battles on the Wabash, including one at Prophetstown on November 7, 1811, the famous Battle of Tippecanoe, which some say led to many Native nations joining Tecumseh. This was an early battle and is unlikely to be the one in which Mookomaanish was wounded. The other battles occurred on September 16, 1812 at Fort Harrison and on the “Wabash River.” It was perhaps during one of these two battles along the Wabash River that Mookomaanish engaged the enemy and distinguished himself.[3] The portrait of Mookomaanish above epitomizes the ‘marks of chieftainship’ by showing Mookomaanish with his chief’s coat, chief’s medal with blue ribbon, a gorget on his shoulder, a silver cross around his neck, and the sword across his lap.

Mookomaanish, like many other Anishinaabe warriors, had their reasons for joining the war against the Americans. Some say that the Anishinaabeg joined due to Tecumseh’s eloquence and valor, others say that the Anishinaabe were fighting for the protection of their families and land, and others postulate that young men joined the battles out of a warrior ethic. Whatever the reasons, Mookomaanish joined the war and fought alongside the British. He received a wound and understood that he was entitled to an annual pension, as the Anishinaabe warriors were told this before the commencement of the war.

The Anishinaabeg and other nations were told this again at the conclusion of the war when General Drummond called for a council to be assembled on March 3, 1815 at Burlington Heights.  There he told the assembled nations, including the Western Confederacy, “Chiefs and Warriors: I have given directions that the money promised to the widows of the chiefs and warriors killed in action shall be paid in the course of 15 or 20 days, also the pensions promised to those worthy men who have been disabled by wounds received in action.” After the war, Mookomaanish tried to collect his pension. In council on St. Joseph’s Island on 11 July 1829, Assiginack speaking on behalf of Mookomaanish told the British:

Father – I am again requested to speak. This warrior (Mo-co-man-nish) says that you told him when you were playing (at war) with the Big Knives (Americans), the red coats never promised anything they did not perform; you told him that if he, or any of his young men should get wounded, you would give him $ 50 every day (year) for the remainder of their lives. This warrior was wounded in the leg. He would have slept (died) on the field of battle had not chance thrown a horse in his way; he reminds you of your promise; he has a large family and can barely support them. Our warrior has nothing more to say. He will expect to hear pleasing words from his Great Father at Quebec on the subject.[4]

Chief Mookomaanish did not receive his pension that year. In fact he again had to appeal to the British in council in 1839, this time at Manitowaning:

Father – I have little more to say. Many years ago when you called upon us to fight side by side with you and not to fear either wounds or death, you promised us that the widows and orphans of our warrior’s should become your pensioners, that those who were struck by the shot of the enemy should, if Chiefs, receive one hundred dollars a year the others fifty. I was one of those, whilst fighting against the Long Knives, a ball struck me and I was unable to walk. My young men placed me upon a horse and conveyed me to my lodge. There are many like me.

Father – I am old and infirm I cannot talk long, there are not many steps between me and the grave, grant me, grant us all our pensions and arrears and we may then build our houses and live in plenty the few short years we have left.[5]

As a warrior and chief of renown, Mookomaanish continued to press for his and his young men’s rights. Despite Mookomaanish’s efforts, judging from the archival records and the statements made by Mookomaanish, he never did receive his pension, nor did his “young men.”

The Jesuits reported that in 1850 the Governor General visited Wikwemikong, on Manitoulin Island, where Chief Mookomaanish had settled after the war. After dinner at the priests’ house, the Governor General then gave audience to various chiefs. Chief Mookomaanish then took this opportunity to once again make his appeal for his pension. In his “History of Modern Jesuit Missions,” Jesuit historian Julien Paquin wrote that the chiefs “paid him [Governor General] the usual compliments which, however, were marred by some ill timed greedy requests. One asked for a life pension for having fought the Americans in 1812.”[6] Although the chief is not explicitly named in Paquin’s manuscript, he is named in the diary and referred to as “poor Bebametabi” who had demanded “nothing less than a life annuity for the part that he had taken in the wars against the United States.”[7] Once again Mookomaanish was denied his pension.

At the first battle of the War of 1812, July 17, 1812, the Odaawaa were initially hesitant because of various British officials’ inability to fulfill their promises. However faced with the prospect of dealing with the Americans on their own, many Anishinaabeg felt they had to side with the British and hold out the hope that they would fulfill their promises this time.

On May 13, 1853 Odaawa Chief Mookomaanish died. He, as well as many others, never did receive the promised pension.

This post is the second in a series of essays on Anishinaabeg participation in the War of 1812. The posts were previously published at ActiveHistory.ca and, in a modified version, in the July 2012 edition of the Ojibway Cultural Foundation newsletter. You will be able to find the rest of the essays here.

Alan Corbiere is Anishinaabemowin Revival Program Coordinator at Lakeview School, M’Chigeeng First Nation. He can be contacted at alcorbiere@gmail.com.

[3] It seems unlikely that Lt Col. McDouall would award a sword to a War Chief for an act that was committed prior to his tenure as commanding officer at Michilimackinac. The exact date of Mookomaanish’s engagement with the enemy requires further research.