Editor’s note: This is the second of two essays on working with online databases to research loyalist history in Upper Canada. They originally appeared in the Autumn of 2016 in a slightly different form as part of a longer series at the group history blog, Isles Abroad. You can find all their posts about loyalists here. We are grateful for the opportunity to offer readers these posts in partnership with Isles Abroad.

In the first post, I looked at some of the historical records that have been preserved and digitised for historians and family historians alike to use to find out more about the early European and loyalist American settlers in Upper Canada (now Ontario). Several of my ancestors were loyalists who settled near the shores of Lake Erie in Upper Canada and many of their descendants are still living in the region.

Today I wanted to demonstrate how to navigate these records to piece together a personal story. I did this briefly with my look at Jacob Anguish’s request for aid that is found in the Haldimand Papers. Today I want to show what can be found across a range of sources for one person, namely Henry Anguish, Jacob’s son.

Henry Anguish is my 5x great-grandfather. Over the course of his life he moved from Canadian to American-held territories and back again. This demonstrates the fluidity of movement across borders during peacetime between the Canadian and American territories. He was one of the first Europeans settlers in the area of Tonawanda, New York. By opening the first tavern in the area in 1811 and creating the first building in what would become the village and then town, he is sometimes referred to as the town’s founder. However, he ultimately settled in Rainham Township in Haldimand County, Upper Canada.

So we know that Henry’s father was a loyalist and that after the war his family’s land in Pennsylvania was no longer theirs. We know that he moved several times in his life. What details can the records fill in for us? Let’s take a look through the different sources that I’ve been writing about.

Collection overview: Sir Frederick Haldimand was the Governor of Quebec (at the time this included present-day Ontario) from 1778-1786. In these reels can be found all types of correspondence and some tables and charts recording names, locations, individual stories and experiences, financial support, encampments, lists of soldiers in specific regiments, and so on. The papers have not been transcribed and there is no online searchable index. There is, however, microfilm reel C-1475 that contains a typed index of names. This guide from Olive Tree Genealogy provides a helpful introduction. The 48 microfilm reels from the British Library are located here.

My first stop is the Index pages on the reel, C-1475, to look up Henry Anguish. The reel shows that a Henry Anguish is found at volume 105, p. 385, and volume 166, p. 81. Below the typed list of Anguishes there’s a note to see Anguish for Angust; this indicates that there must be places in the records where the last name was written as Angust. I should mention that there are a number of Anguishes in the list. In order to be satisfied that I had found everything, I would look up every one to see if they happen to also mention Henry.

Now we need to find which digitised microfilm reels contain volumes 105 and 166. Library and Archives Canada have put the four volumes that they consider to be ‘Loyalist Volumes’ all on one reel, C-1475, the same one we used above for the index. It’s just a matter of finding the right page in the right volume. For ease of future searching, I’m noting the start pages of each volume here:

This should help us pretend that they are proper volumes and not one large, artificially created microfilm reel. It’ll also speed things up.

First we want to find Henry in Volume 105 Page 385. This is found through a lot of ‘hit and miss’ work with pages, because the pages aren’t all there. Unfortunately, when I did find the image it’s pretty poor quality (see below).

What we have here is a list of loyalist families that are under the command of Captain Lewis Geneway and the rations allotted to them. Geneway was a Captain in Butler’s Rangers, the regiment Jacob had fought with.

Henry is listed with his family on the right side of the page:

This segment of the list shows that Henry is 18. He is with his father, Jacob (age 63), his mother Elizabeth (age 54), older brother Jacob (20), and younger sisters Anna (16), who was initially left out by the transcriber) and Elizabeth (10). The family is entitled to 2 rations. Extrapolating from information on slightly clearer pages, it looks like this list is from 30 November 1783, the year before Jacob applies for aid for his family.

Next, we want to find Henry in Volume 166 page 81. Henry August is listed next to a Hanah August on a list of loyalists from 1 August 1787 who are about to lose their right to provisions. Henry August is noted as being 14 and fit for service. As Henry’s last name is different, Anna’s (or Hanah’s) entire name is spelled incorrectly, neither are the expected age, they are not situated with their family, and they are in Montreal (we don’t know where they were in the first list, but have no evidence that they did not stay in the Niagara region where Jacob had been treated), we can’t be sure that this is the same Henry. However, we’ll keep it in our notes.

Collection overview: 327 digitised microfilm reels containing details of loyalists and their descendants who are submitting a claim or ‘petition’ to an initial or additional grant of land in the newly-created Upper Canada. Their requests contain varying levels of details and may also include additional supporting documents as well as information on whether a grant was made, why or why not, and what the grant entailed. Requests from the descendants of Loyalists tend to provide useful information for genealogists and those interested in family history because the petitioner has to outline their heritage to justify their claim. The search page is located here, and the digitised microfilm reels are here.

My first stop is Library and Archives Canada’s Search page for the Land Petitions of Upper Canada, 1763-1865. A quick search for the surname Anguish brings up 15 results; Henry is first. 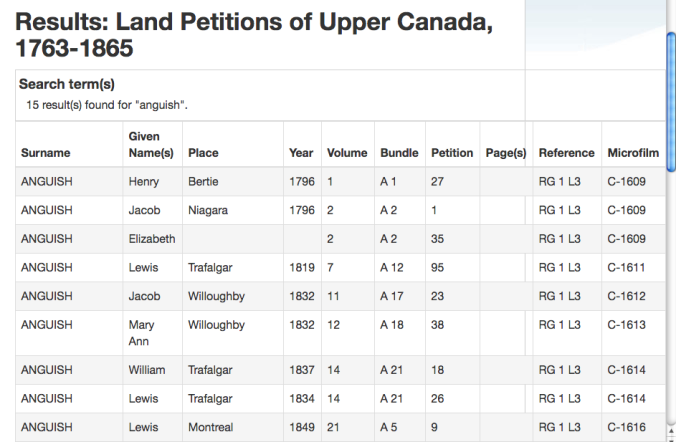 Partial list of Search Results for the surname ‘Anguish’

Then, starting with the Microfilm reference in the far right column, C-1609, I search for the item with the digitised, microfilmed Upper Canada Land Petitions. Henry petition is number 27 in volume 1, so I thought I wouldn’t have to dig through too many images, but I was wrong, as volume 1 isn’t the first volume on the reel. Also, it’s important to note that the Haldimand Papers are numbered by page, but the UC Land Petitions are numbered by petition, so I am looking for Petition 27, not page 27 (like I would if I was searching in the Haldimand Papers).

Henry’s petition is found on page 276 of reel C-1609. It is addressed to John Graves Simcoe, the Governor of Upper Canada, and dated 11 May 1796. The petition tells us that Henry has lived in Upper Canada since 1778 and has about 50 acres of land which isn’t enough to support his family, which now consists of his wife and their four children. He states that his father served in the war under John Butler and his wife’s father had been a Sergeant in the same regiment. He concludes by praying that his request will be granted as they will suffer if it isn’t, and signs his name to the petition.

The following page records the reply: Henry and his wife are to be granted 200 acres of land each. In the reply they specifically note that Henry’s wife is the daughter of a loyalist.

Collection overview: Minutes and records of the Land Boards of Upper Canada, including letters with detailed information about individuals and charts recording the most basic information about land recipients (name, amount of land granted, and date of the grant). The records can be searched from the Library and Archives Canada search page, and the digitised microfilm reels are here.

A quick search for Henry Anguish leads us to a digital record of where he can be found in their list of land recipients:

The record here could be quite misleading. While the year given is 1802, when you find the actual entry in the manuscript, the date of the land grant was 12 May 1796. We already know this from our search above. The 1802 comes from the list of the Attorney General as they attempt to track all of the land grants, as the grant is recorded in the Land Board’s records on 24 March 1802.

Collection overview: 41 reels of ‘finding aids’ in the form of thousands of filmed index cards with names that are related to requests and decisions about land grants in Upper Canada. These cards, organised in alphabetical order by the petitioner’s last name, refer to other sources where a request was recorded. There’s no online search, although reels H-1976, H-1977, and H-1978 contain an index. The digitised microfilm reels are here.

Here are the two record cards for Henry Anguish, found in Image 2821 and Image 2822:

Collection overview: 21 digitised microfilm reels recording the workings of the Heir and Devisee Commission, including legal documents, testimony, copies of wills and mortgages, and other information that was required by and sent to the Commission by claimants wishing to receive confirmation of land ownership. In other cases, information is displayed in the form of a chart (as above). Some volumes begin with an index. The First Commission is for the period 1797-1804, the Second is 1805 and onwards — and the claimants. The Second Commission dealt with only descendants. Most of the original nominees had died by this point, and those who remained could apply directly to the Surveyor General for their patent (the confirmation of land ownership). There is an online search here and an index to the records, and the digitised microfilm reels are here.

The only Anguish found in the Second Commission’s records is Lewis, Henry’s son (and my 4x great-grandfather) and shows that Lewis was granted land in Rainham township in 1841. The search results also give us useful details for tracking down Lewis’s grant in the records.

I hope what we can take from this search is that we can find out a lot of information about loyalists and their families in the digitised sources. In some case this information includes interesting little details and insights into the lives, locations, living conditions, and the needs of early settlers in Upper Canada, while in other records these men and women and the documents they created have been amalgamated into the bigger picture of the European and American settlement of early Canada after 1776. When combined with some of the excellent recent works on loyalist history and the history of Upper Canada, these stories of individuals bring the larger studies to life.

Paula E. Dumas is a Tutor of slavery history at the University of Glasgow’s Centre for Open Studies. Her first book, Proslavery Britain: Fighting for Slavery in an Era of Abolition (Palgrave Macmillan, 2016), explores the defence of slavery in late eighteenth and early nineteenth century Britain. You can follow her work on Isles Abroad and on Twitter @historybypaula.