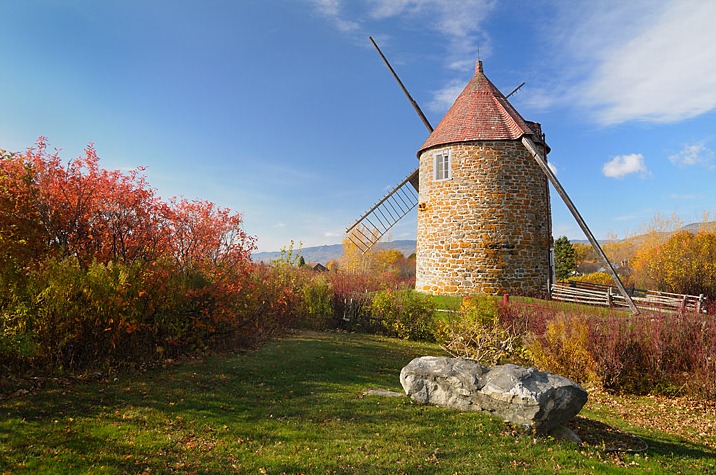 Participating in panels on history and heritage in recent weeks has given me pause to reflect on the relevance of the historical discipline to the climate emergency and climate change. The two events on which these reflections are based were seemingly quite different. The first was a panel on “L’historien.ne, le temps et l’urgence climatique”[1] that took place during the last assembly of the Institut d’histoire de l’Amérique française (IHAF) in Ottawa[2]. The second event, a workshop entitled “Au-delà des pierres: le patrimoine immatériel de la meunerie artisanale”[3], was held at the conference “Histoire et patrimoine seigneurial” at the Seigneurie des Aulnaies[4].

I must first acknowledge the initiative of Professor Thomas Wien (University of Montreal) who, under the chairmanship of Michèle Dagenais (University of Montreal), gathered Ottawa historians Daniel Poitras (IHAF) and Fabien Locher (CNRS, Paris) to reflect on climate change from a historical perspective. The quality panel began with a fervent message from Wien, who at first gave a statistical reminder of the current climate crisis and the wall that humanity is about to hit, all in relative inaction: rising concentration of CO2 in the atmosphere, melting ice caps, rising sea levels, climate disasters, humanitarian crises, loss of biodiversity, and the exponential nature of climate change. The scene was set for the questions underscoring the rest of the session: How did we get here? What does the relative inaction in the face of this crisis tell us about the relationship of today’s humans with time (at least Westerners)? Inspired by the historian François Hartog’s commentary on presentism[5], Wien explained how he perceives the Western temporal horizon as that of a “monstrous” present – an omnipresent present, to put it another way. It follows from this a certain contemporary incapacity to think about the future apart from a destructive modernist teleology. Pointing to the importance of the modernist narrative for Quebec since the Quiet Revolution—a colonized people obsessed by the need to “catch up”, to make an entry into “modernity”—Wien denounced a collective narrative based on blind faith in the progress of liberalism. Faced with the climate emergency and the impasse toward which humanity is heading, it seems clear that we need to reconsider this naive trust in “progress.” It is in this context that Wien calls for a counterfactual history, that is to say, to study the horizons of the future of the past, because, he concludes, “the opening of the possibilities of the past helps to open the possibilities of the present.”

Fabien Locher, an environmental historian who is preparing to publish in Le Seuil, with Jean-Baptiste Fressoz, Une autre histoire du changement climatique,[6] proposed a longue durée reading of humans’ relationship with climate change. In this regard, the great contribution of environmental history, Locher tells us, is to question the accepted idea that humanity, full of confidence in “progress” from the Enlightenment to the middle of the 20th century, degrades its environment without even worrying about the consequences. On the contrary, it is wrong to say that there would have been such “evolution” without consciousness. Once again, it is the same modernist teleology, the dominant narrative of Western societies, which is singled out, so that it has made us forget that societies have been concerned with climate change and the deterioration of the environment they observe around them for a long time. Only, and here is the rub, the worried voices were drowned out, controlled and repressed even, by the dominant forces of “progress.” Indeed, these forces – economic, political – have historically had extraordinary power: that of silencing climate fears. Thus, until very recently it seems, we have relinquished our collective memory of popular complaints about climate change and the dynamics of power that has helped to shape this reality. Echoing the words of Thomas Wien, Fabien Locher explains that one of the most important functions of history today is to re-politicize the relationship of humans with their environment through time in order to bring out a certain dominant historical narrative, again, of a blind faith in progress. In other words, it is necessary to renew a skepticism towards progress and to investigate the powerful forces that have silenced climate fears over time.

Daniel Poitras, another critic of the modernist narrative, recalls that the “regime of modernity” from which contemporary society is derived consecrates an artificial separation between humans and nature, as if the latter existed only as an instrument of the advancement of the former. As an indication of this, Poitras evokes science-fiction literature that offers multiple examples of utopic futures in which technical progress has led to an idealized form of urban and hyper-technological society. According to Poitras, however, we are probably witnessing a vague, ambiguous period. While we face the wall we are to inexorably crash into, we can see manifestations of a form of nostalgia for a “modern future”; a future for which mankind has always felt an unshakable confidence and a profound conviction that would become the finality of “progress.” This fantasized future – this triumphalist state of mind from which we cannot separate ourselves easily – we periodically try to update. As proof, Poitras states the case of the famous Plan Nord initiated by the Liberal government of Jean Charest at the beginning of the second decade of the millennium, wishing to economically develop the regions of northern Quebec: would this not be a way to reconnect with the major projects of the Quiet Revolution that have been associated with the entry of Quebec into “modernity”? Would it not be a desire to restart the “matrix of modernity”? But is it not blatant anachronism, in the context of a climate emergency revealing all the perverse consequences of modernist fantasy, to want to re-engage the modernist matrix? Should we not finally leave behind the nostalgia of the modernist future? Is that not the beginning of the solution to the current climate crisis?

The conclusion that Michèle Dagenais proposed to this panel seemed to me the most adequate. Over the past few months, says Dagenais, we have heard the young Swedish environmentalist Greta Thunberg asking political and economic world leaders to listen to science. All the power to her. But there seems to be, Dagenais wonders, an oversight in Thunberg’s appeal, symptomatic of what the panelists have called the unshakable faith in the “progress” of techniques. Indeed, despite the great importance of science in the understanding and the resolution of the climate emergency, it seems that we must also renounce the constantly-renewed myth of saving technicity. History, Dagenais recalls, also has a role to play in the resolution of the climate crisis, and this essentially resides in the revisiting of past “moments” and “arrangements” which can inform us about paths not taken. Dagenais also recalled, inadvertently, what Thomas Wien said during his own intervention about the need to revise “recipes” of yesteryear that were aimed not at dominating nature, but at coping with it.

The term “recipes,” used by Wien, allows me to make the connection to the second part of my reflection. Indeed, the world of Saint-Laurentian artisan milling has recently been the instigator of a somewhat surprising reflection on the social relevance and the eminently “modern” aspect of the traditional know-how of bread makers. The symposium “Histoire et mémoire du régime seigneurial”[7] was an opportunity for stakeholders from different backgrounds to discuss new approaches in the history of the Laurentian seigneurial regime as well as issues related to seigneurial heritage. One of the symposium’s roundtables, organized by historian Ophélie Têtu, a specialist of millers in the St. Lawrence River Valley during the pre-industrial era, brought together several people to reflect on material and immaterial heritage matters regarding the artisanal milling industry. The discussion, as one might suspect, identified a number of issues related to funding and, unsurprisingly, to “succession.” To discuss problems related to workforces, three millers where on the panel: two much experienced millers and one, about 25 years of age, identified as an apprentice miller. Beyond an interest in folklore and history, and the pride in being one of the few bearers of a certain traditional know-how; beyond all that, in fact, it seemed a little bit puzzling for the millers themselves to identify with any “modern” relevance to the job they perform. However, the musing conducted jointly with the audience was soon to provide an answer that is fully in line with the statements made above at the IHAF congress. It was recalled that the mill of the Seigneurie des Aulnaies, anxious to revive a certain seigniorial past to its visitors, itself provided an example of a place of artisanal food production fully meeting the current concerns in the fight against climate change. In fact, for several years, the wheat sent to the seigneurial water mill has come from ancient, organically grown species, and this, within a radius of about ten kilometers from the seigneurie. Moreover, the flour from this wheat is used by the bakery adjoining the mill (Du Pain … C’est tout!)[8], a business whose products are destined for the local market. In other words, we find on the site of the Seigneurie des Aulnaies an example of traditional know-how that meets the growing expectations of local and organic production and consumption, more respectful of the environment. We realize, upon closer inspection, that the handful of people who continue to work as millers in the St. Lawrence Valley and those who continue to be the promoters of traditional know-how are to be revered in an essentially “modern” context. Far from being an example of simple “backtracking,” this seems to me to be a clear example of how “recipes” of the past could serve as examples in our search for “modern” solutions to the climate emergency.

Technical progress and science will not be the only answers to the current crisis. Our future will not find its way only through pure innovation; our future will base its horizon partly on traditions from a time when humans probably had a more “sustainable” relationship with their environment. Thus, the climate emergency allows the discipline of history to find a relevance that could well be crucial to the future of humanity. Of course, history didn’t need a climate crisis to find its social relevance, but it seems clear that its ability to bring humans together through the ages finds today a particular “environmental” resonance. Faced with the “monstrous present” of the regime of modernist historicity from which we come, particularly in Quebec since the Quiet Revolution, we should probably give more space to the “science” of the past, at least as great as that of the science of which Greta Thunberg ceaselessly, with reason, reminds us the importance of.

I will repeat the words of a graduate seminar history professor I once had. A rather dreary autumn afternoon, the type of day that makes it hard to get motivated for life, she asked us a seemingly simple question but one that, undoubtedly, irked many of us: “what is the relevance of what you are doing? What are you useful for? Before the dubious looks in our eyes, the professor answered the question herself: “Be ambitious: we, historians, could save the world.” This is what I would like to say to the young apprentice-miller who, beyond the folkloric interest of his profession, might be seeking a usefulness to what he does: your interest in history may contribute to the saving of the world.

Olivier Guimond is a PhD student in intellectual and cultural history at the University of Ottawa.

* I warmly thank George Coronado for his help with the translation from French to English.

[1] “The historian, time and the climate emergency.”

[3] “Beyond stones: the intangible heritage of artisanal milling.”

[6] “Another History of Climate Change.”

[7] “History and Memory of the Seigniorial Regime.”