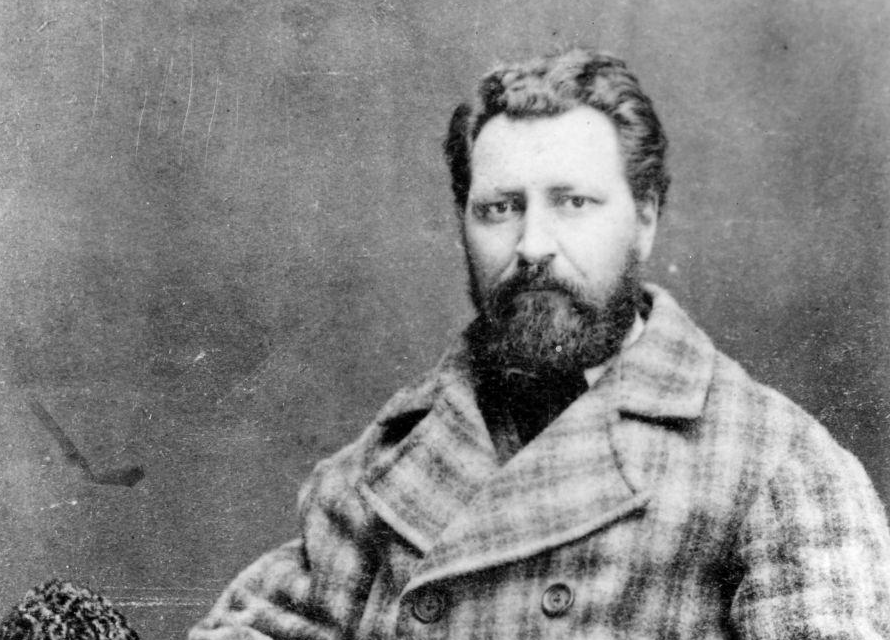 The toppling of the statue of John A. Macdonald during a protest against policing in downtown Montreal last month was part of a global revolution in public opinion.[1] As Peter Gossage remarked, “this is no longer Macdonald’s Canada.” Some dismissed this as the continued discords between the two solitudes: “here they go again.” Others, with a certain knowing condescension, attempted to separate Macdonald and policing. But Macdonald and policing are part of the same story.

Repeatedly, John A. Macdonald used law enforcement to silence objections to his own government’s unlawful occupation of Indigenous territory. Most notably, Macdonald played a key role in the creation the North West Mounted Police, as well as the Dominion Police. Indeed, Canada’s police system was created to oversee Indigenous people and impose “civilization.” Policing sits at an intersection between the state’s capacity to impose order and the need to represent the public. Thus, just as in the nineteenth century, in the twenty-first century policing remains integral to the representation of the state and how Canadians understand civil society.

The toppling of the statue invites historians to consider how Macdonald’s Canada and the history of policing are related.

In my work, Louis Riel’s life has afforded an opportunity to unpack “Macdonald’s Canada” and given me the mental space to understand how certain ideas about Canada are realized, or passed over. While the executions of 1885 are undoubtedly important, I suggest that understanding Riel’s life helps us to better understand why Macdonald’s presence in public space is unwanted on a number of issues. Riel offers us a way of getting at numerous fissures that run through Canadian history. Policing is an important one.

For starters, consider the Grip’s 1873 cartoon of Macdonald futilely chasing Louis Riel with a billy club. Despite obvious proximity, Riel is unrecognizable. This cartoon speaks volumes about how policing helps narrate the history of state sovereignty. The injustice here is that a corrupt and irresponsible Macdonald is looking the other way. Alexander MacKenzie looks on; he is helpless against this obvious miscarriage of justice. This cartoon also raises questions about state’s capacity to impose order with regard to policing Indigenous resistance.

Settler state sovereignty is always predicated on the criminalization of Indigenous resistance. 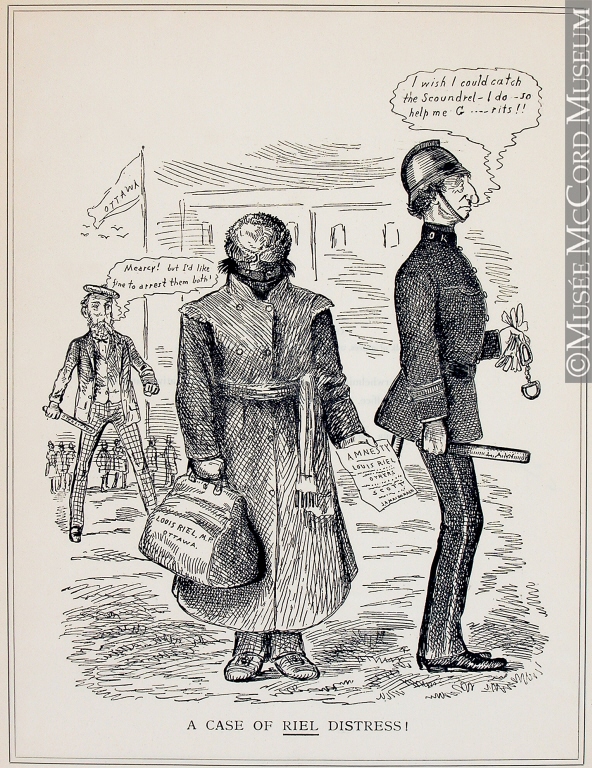 Such misrepresentation of Macdonald as a bumbling bobby hides a more shrewd policy.  At the first hint of trouble in the Northwest, in November 1869, John A. Macdonald presented some advice to William McDougall, the man appointed by the Canadian government to oversee the annexation of the Northwest.

It occurs to me that you should ascertain from Governor McTavish to name two leading half-breeds in the Territory and inform them that you will take them into your council. This man Riel, who appears to be a moving spirit, is a clever fellow, and you should endeavor to retain him as an officer in your future police.  If you do this promptly it will be a most convincing proof that you are not going to leave the half-breeds out of the Law.[2]

Is it surprising that Macdonald considered Riel for a position in the police? Perhaps not if we consider the context in which Macdonald and many other British North Americans viewed the frontier.

Hiring representative members of a minority is not a 21st century invention. By the mid-nineteenth century, native police forces had become a familiar way of providing cheap and effective security for colonial state authorities across the British empire. In the British colonial project, “native police” had become a key part of extending a “civilizing influence.”

Ultimately, Macdonald did not follow his instincts, and he failed to convince the Métis of the legality of his government. In 1869, only a month later, Macdonald wrote in another private letter to George Stephen (of Canadian Pacific Rail fame) about the inadvisability of taking military action too quickly.

“We must not make any indications of even thinking of a military force until peaceable means have been exhausted. Should these miserable half-breeds not disband, they must be put down, and then, so far as I can influence matters, I shall be very glad to give Colonel [Garnet] Wolseley the chance of glory and the risk of the scalping knife.”

Of course, Wolseley arrived in Red River in August 1870 as the vanguard of Canadian state occupation and his soldiers terrorized the settlement. In his rush to “civilize” Macdonald deserted “civility.”

Quickly pivoting to meet Indigenous resistance with racial violence is a legacy of John A. Macdonald’s policing. This is a trend in the history of empire: power is generated by exploiting difference.[3] Unfortunately, Macdonald’s failure continues to impair Canada’s relationship with the Métis nation and other Indigenous nations. Indeed, as Macdonald aged, he increasingly relied on the dog whistle politics of racism and religious difference that sustain populism. Framing Indigenous people as criminals continues to divert attention from Canadian and American state illegality.

So what do we get if we take up Riel’s perspective? Riel called out Macdonald’s uncivilized mendacity. For Riel, Macdonald lacked truth and honesty:

For Riel, incivility was tied to the violence brought Macdonald, and by extension Canada, to the Northwest. Canada’s efforts to police were vulgar. To be clear, Riel thought that security required civility.

Would incorporating Métis as civil servants into the Canadian security have made sense? Canadian government invited violence and lawlessness, but the Métis had for years provided security for the settlement. In Red River, governance depended upon Indigenous peoples’ capacity to police. Riel grew up watching his father who actively participated in civil life. While today remembered for resistance, first during the Guillaume Sayer trial, and, second, at the ejection of the law-maker Adam Thom, Riel’s father also served on juries, acted as witness and defendant in the local court, and petitioned the government to equip a local troop of volunteers to secure the community.[5] For Louis Riel, as for his father, public order depended for its legitimacy on civil society, something fundamentally different from the order imposed by a colonizing state.

In fact, Riel’s government-funded Métis security forces against Canadian efforts to disrupt the public order. The moral and practical ability of the Métis to guarantee security was essential to their sovereignty, and “policing” had long been part civil governance. Most famously, Cuthbert Grant held the grandiose title of “warden of the plains” from the 1830s until the 1840s.[6] There were many others who took on roles as auxiliary officers of the law. Governor Alexander Christie hired Louis Plouffe as Gaoler in 1838, and renewed in 1848.[7] Court records show that during the 1845 the murder trial of Ketchipempass, cash payments were made to Métis constables.[8] Throughout the 1840s and 1850s, sums were paid to various witnesses and interpreters in the court.[9] Other examples abound. The employment of these auxiliaries of justice offers a hint of how law and sovereignty ought to have been negotiated. As we learn to appreciate the unequal relations of power between minorities and the Canadian state, begin to consider the issue of representation in institutions, and raise the issue of defunding and abolishing the police, it is imperative that we ask how policing and sovereignty are entwined in both accommodation and resistance to state power. Law was a central tenet in the imperial state formation, but, as Lauren Benton has shown, it was necessarily multi-layered and complex, often with overlapping sovereignties.[10]

In a recent essay on the history of violence, Amanda Nettlebeck and Lyndall Ryan offer an opening for historians of colonialism. “The impact of ‘native policing’ may have been not only coercive but also a form of Indigenous adaptation to the structural changes wrought by settler colonialism.” We ought to consider why Canada never formed a dedicated force of “native police”, and what that means for the vision of the state.[11] After all, there was plenty of opportunity and historical precedent.

In the end, Riel’s success, rather than Macdonald’s failure, was a key part of why Canada turned first to Wolseley and then to the NWMP.

Max Hamon teaches and researches the history of colonial North America during the long 19th-century, with particular interest in the intellectual and cultural history of the Métis and French Canada. His writing draws links between the histories of the east, west, north and south, the French and the English, Indigenous and settler histories. His first book, The Audacity of his Enterprise: Louis Riel and the Métis Nation that Canada Never Was (1840-1875) explores the formation of the Canadian state in the nineteenth century and highlights the perspective of Louis Riel. His current research, as the Buchanan Postdoctoral fellow in Canadian History at Queen’s University, concerns the history of policing in British North America and Canada. You can find him on Twitter at @max_hamon.

[1] I would like to acknowledge the comments and interventions of Elsbeth Heaman, Steven Maynard, and Jeffrey McNairn. Thank-you to Keith Grant for all the encouragement. Of course, all errors, opinions, and interpretation remain my own.

[5] In 1863 a series of petitions were distributed in Red River in response to the fear of Sioux refugees fleeing a punitive American military. For a discussion of this campaign see The Audacity of his Enterprise: Louis Riel and the Métis Nation that Canada never was, 1840-1875 (Montreal: McGill-Queen’s University Press, 2019), 71-78.

[7] Plouffe would have been the son of a Canadian Louis Plouff who came to Red River in 1780 and an unnamed Indigenous woman. See Council of Assiniboia Records, Box P 7534/1